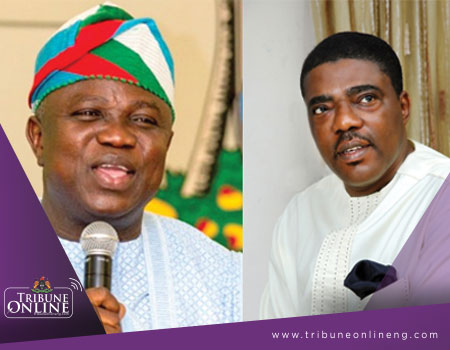 Former member of the National Assembly, Senator Ganiyu Olanrewaju Solomon (GOS), has commended Governor Akinwunmi Ambode of Lagos State over his achievements in office in less than two years, saying that the governor was positively projecting the image of ruling All Progressives Congress (APC) with sterling performance.

Solomon, who represented Lagos West Senatorial District, made the remark on Saturday evening while speaking at the inauguration of Lagos Mainland Chapter of Liberal Minds Grassroots Forum (LMGF), a think-tank group within the APC.

The former lawmaker said the result of the performance of Governor Ambode was evident to all, as all parts of the state had been positively touched in the transformation agenda and inclusive governance approach of the present administration.

Solomon, who is the Life Patron of the group, said it was worthy of note that the massive development being implemented by Governor Ambode cut across all sectors and sections of the state, adding that the governor deserved to be commended for his great efforts at moving the state forward.

“We are happy that Governor Ambode is doing a lot in Lagos State. Our governor has not disappointed us. He (Ambode) will be two years in office on May 29, 2017, and he has done so well.”

“There is no local government in the state that has not been touched. In fact, there is no longer rural area in Lagos State as the governor has transformed everywhere, I mean everywhere. Just few days back, we were at Alimosho to commission a bridge and network of roads in the area.”

“The development is not limited to infrastructure alone but every sector including health, education, security, among others, have been positively touched,” Solomon said.

He congratulated members and leaders of LMGF, saying that his decision to associate with the group was because its vision was firmly rooted in the APC, which among other things, was the progress of the country and wellbeing of the people.

In his welcome speech, State Chairman of LMGF, Mr Adeleke Adekoya, recalled how the group came into existence as a campaign organization for Governor Ambode in the build up to 2015 elections.

He said it was worthy of note that apart from its core mandate of political intervention, a lot of assistance had been rendered to people through the group.

“This is a group of core professionals with the main goal of political stability of our state. We are also doing some empowerment programmes. We give alms; we support the less-privileged; we support the aged and it is safe for me to conclude that we are a social and philanthropic group,” he said.

Adekoya, who is also the Senior Special Assistant to Governor Ambode on Survey, said it was glaring that the governor had performed brilliantly well in less than two years.

“Like the area I belong to, you can see the land administration in the state and I am telling you in the next one or two months, you will see that all the land issues in the state will be solved in less than one month. People will be able to get their C of O in less than a month.”

“Generally, now, land administration in Lagos State is being automated. I don’t want to start mentioning the giant strides of the governor in area of infrastructure but you know Governor Ambode has been acknowledged both within and outside the country as the best governor.”

“Lagos State, under Governor Ambode, has been acknowledged as the best safety conscious state in Africa. He has won awards in United States and United Kingdom and in less than two years, he has done well. In the next two years, he will also perform creditably that we will not even need to campaign for him for the second term,” Adekoya said.

CBN auctions $418m to some sectors to boost forex liquidity