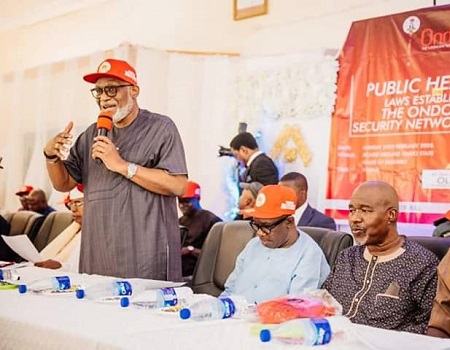 Thappontmnt of Adeleye as the Amotekun Corps Commander is was contained in a statement issued and signed by the Chief Press Secretary (CPS) to Akeredolu,  Mr. Segun Ajiboye, said the appointment takes immediate effect.

Governor Akeredolu had in March signed the Ondo State Security Network and Amotekun Corps Bill into law, with the view ti combat crime and criminals in the state.

While signing the bill into law,  the governor assured that the Amotekun Corps shall be complimentary and not independent of the operations and efforts of the Nation’s security agencies.

Akeredolu said “We wish to reiterate that the Amotekun Corps is a child of necessity and was purely borne out of the need to explore other means of securing our forests and protecting all those who do legitimate business within the Southwest Region.

“For the umpteenth time, the Amotekun Corps is not an independent regional outfit but a complimentary efforts by the governors of the Southwest to engender unity, peace and security.

“Most importantly,  the corps shall not be allowed for political purposes; it has no business at political rallies just as the Police must continue to discharge its obligations and responsibilities to the people”

“The Governor wishes the new appointees success in their various assignments”the statement stated.