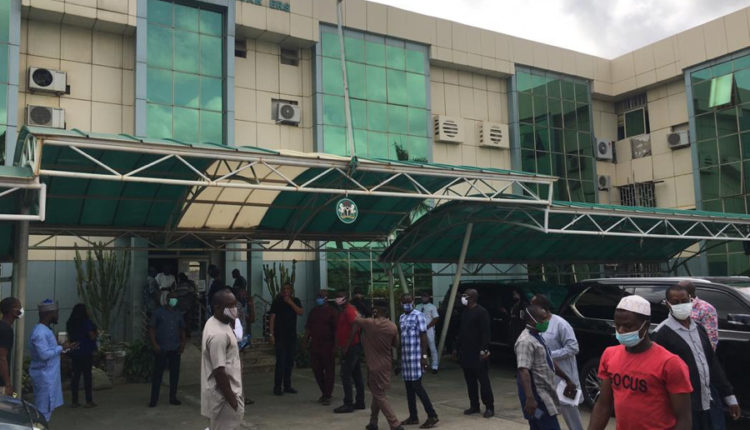 Some Contractors on Wednesday stormed the headquarters of the Ministry of Agriculture and Rural Development in Abuja, blocking the entrance to the Minister’s office, as they demand for the payment of contracts they executed for the Ministry.

The protesting contractors who were chanting ” the “Minister must go”, “the Permanent Secretary must go”, “pay us our money” could not be stopped or vacated from the Minister’s by the security on duty

The contractors insisted Minister or the Permanent Secretary must come out and address them.

The contractors lamented that some of their colleagues had died from heart attack as a result of non payment of the debt owed them by the Ministry.

They said credit facilities they obtained from banks to execute the various contracts have accumulated service charge, which is already affecting their health.

Speaking, one of the contractors who identified himself as Comrade Lucky said contractors were awarded various agriculture contracts by the ministry since 2018, and had completed the contracts, but the Ministry had refused to pay them.

“We are here to take our destiny in our own hands, because since 2018 we were given the contracts we bidded for, which we also executed. We have been coming here  for payment with the certificate of completion issued to us by the same  Ministry.

“I have also heard that some of the Ministry officials have been demanding for  percent from some of our colleagues,  but as for me, nobody has asked me”, he said.

Another contractor, Ms Ada Nwahiri, lamented that she had executed two borehole projects in Akwa Ibom state for the Ministry, which had been duely certified by relevant engineers of the Ministry.

She noted that the bank where she obtained loan to execute the contract has been on her neck for repayment, and right now have no place to resort to.

“I borrowed money from the bank to execute the contract,  and I have pulled up bills to pay, but the Ministry has refused to pay us.