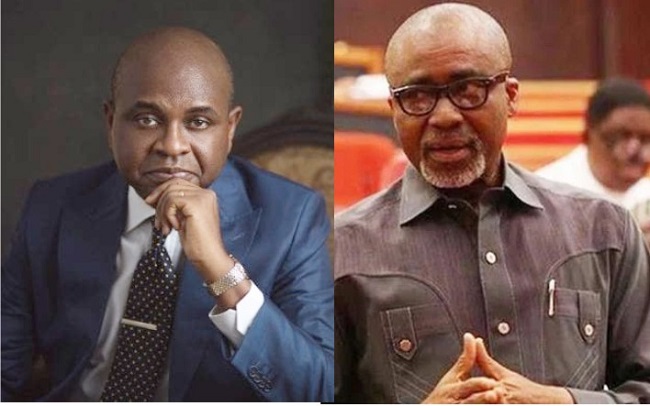 The Senator representing Abia South Senatorial Zone, Senator Enyinnaya Abaribe, has advocated inclusive governance as a panacea to alleged marginalisation being registered by ethnic nationalities in the country.

This was just as the former YPP presidential candidate in 2019 elections, Professor Kingsley Moghalu, called for a restructured polity based on equity and justice.

Abaribe and Moghalu made the call in Enugu at the inauguration of Igbonine, a new Igbo socio-cultural organisation.

Igbonine is an apolitical association of all Igbos in Nigeria and anywhere in the world regardless of dialect, religion, socio-economic class and political ideology.

The senator noted that the alleged unequal treatment of various peoples and segments that make up the country remained the root of the present political challenges of the country.

The vocal Peoples Democratic Party, PDP, the senator pointed out that “Luckily, it is not only the South-East or Igbos that feel alienated; but the cry of marginalisation is spread over the country.”

“They are only painting Igbos as only those complaining and causing trouble.

“Our country is supposed to be an inclusive country, where fairness, equity and deliberate action to ensure every part of the country is duly represented and carried along,’’ he said.

Abaribe noted that Igbo had invested in the unity, oneness and progress of the country more than any other ethnic nationality or people.

“We are the largest domestic investors in Nigeria today and have our investment scattered all over the country even to the remotest parts,” he added.

He averred that “Igbos are the glue that holds Nigeria together. We are found everywhere; we interface and inter-cohabit with other tribes and ethnic nationalities in the country very peacefully and progressively.
“Igbos remained the most travelled ethnic nationality to other parts of the country to interact and understand them better.”

Professor Kingsley Moghalu, on his part, noted that although Igbo had gradually recovered economically from the civil war, “our people are yet to recover politically’.’

Moghalu, who was the Presidential Candidate of Young Progressive Party YPP in 2019 General Election, urged Igbo to close ranks and build a formidable force to assert themselves politically.

He said: “I will also urge our people to go for those that have wisdom and intellect to deliver on set goals rather than the ongoing cash-and-carry politics prevailing among us.

“The first generation of Igbo politicians in the first republic like Zik of Africa, Michael Okpara, Akanu Ibiam etc were great intellectuals endowed by God to deliver the region and country at that time.”

According to Muoghalu, “what we want now is Nigerian president of South-East extraction. It is achievable with a collective and united will of our people.

He said that the international community would not support the break-up of Nigeria because of the position of Nigeria in Africa.

The former Deputy Governor of Central Bank of Nigeria appealed to Indigenous Peoples of Biafra, IPOB, and other secessionist agitation groups in the country to instead of championing a break-up of Nigeria, insist on a restructured Nigeria where everybody would have a feeling of belonging and be treated equally.

Moghalu, who spoke in a lecture titled “What do we want?” at the inauguration of Igbonine, a novel Igbo organization that is championing the project of a president of Southeast extraction in 2023, said in spite of the obvious marginalization against the Igbo in Nigeria, the Igbo must continue to resist any hegemonic worldviews in Nigerian politics and assert their own political relevance, through persuasion combined with firmness, and partnerships with other ethnic groups.

He explained that though the status quo today is that Nigeria is mostly a unitary state in reality although federal in the name.

“It is a failing state. It is failing because it is weak, from the standpoint of the absence of state capacity to secure the country’s territorial integrity against terrorists, extract taxes for effective fiscal governance as opposed to the reality that we now live on external borrowing, and to dispense administrative services to its citizens effectively despite a bloated public sector”, he asserted.

“The status quo is of no value to Nigeria and is stunting our country’s development, although a small,
parasitic political and business elite profits from the current state of things. But it is unsustainable, as we all know.

Muoghalu listed three broad sub-themes to his discourse to include: “Firstly, on the burning issue of Constitutional restructuring to return to real federalism with significant autonomy for regional or state governments”.

The YPP leader said “This is the most widely supported option in the minds of most Nigerians — including the Igbo of the Southeast — today. Even the core Northern region, which was reticent about restructuring, is coming around to
its inevitability as the way out of Nigeria’s quagmire. Unfortunately, President
Muhammadu Buhari’s publicly stated opposition to the constitutional restructuring of Nigeria makes it unlikely that this will happen during his tenure of office, and so in reality this will have to be dealt with and sorted out by the next administration.

“But that is only if in 2023 we elect a president who has the will and, importantly, the capacity, to lead in this direction. There is no question in my mind, however, that Nigeria’s future in the absence of the imperative of restructuring is a bleak one, and the country, in fact, is unlikely to survive for long as one entity in that scenario”.

On the issue of a Nigerian president of South-East Igbo extraction, he maintained that ” It is believed that this political outcome is essential to stabilize Nigeria and secure full national reconciliation after the Nigerian civil war over 50 years ago. It is also a fundamental element of justice, equity and inclusion, as other regions of the country have had the opportunity to produce the President of Nigeria since 1999. In the Southern part of Nigeria’s three geopolitical zones, the Southeast is the only one that has not produced the president in the context of informal but important North-South rotation of political power.

On secession, Biafra; Muoghalu posited that, “This option is advanced by groups who believe that Nigeria has failed Ndigbo, do not want to give the Igbo their place as equal Nigerians with other groups, and are driven by the nostalgia for ethnic purity in place of a multi-ethnic nation.”

He, however, noted that the option for secession faces certain fundamental obstacles, adding that although international law recognizes the right of peoples to self-determination, “that right is virtually unassailable when it is expected”.

Earlier in his welcome address, the President of Igbonine, Chief Emeka Okonkwo, said that Igbonine was borne out of the passion to lend positive and unifying voices to affairs concerning and affecting the Igbo man.

Okonkwo said that the association would support the renaissance of the Nigerian new social order as encapsulated in the 1999 Constitution for the enthronement of equity, justice, fairness and some measure of the ideal of freedom.

He said: “We believe it is only in this way that we can achieve a united Nigeria that is enviable to the rest of the world.

In spite of the huge investment in the water sector by the government and international organisations, water scarcity has grown to become a perennial nightmare for residents of Abeokuta, the Ogun State capital. This report x-rays the lives and experiences of residents in getting clean, potable and affordable water amidst the surge of COVID-19 cases in the state…Moghalu harp on inclusive  Moghalu harp on inclusive