A look at 50 top role models in Ogun 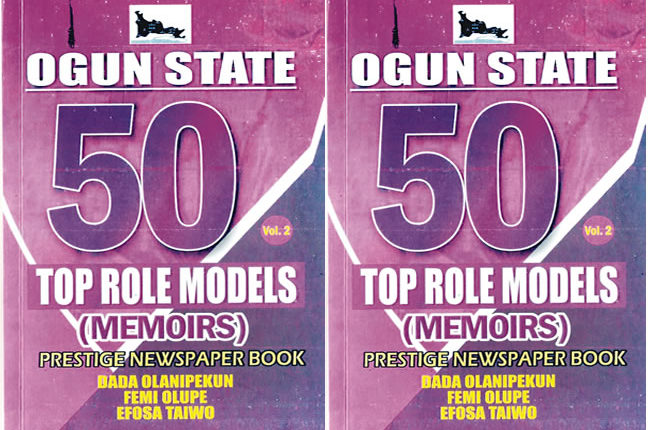 Top Role Models Memoirs, a publication of Prestige Newspaper as a compendium beams its research torch on another 50 select exemplary citizens of Ogun state with outstanding charisma from diverse fields of human endeavors.

The stylistic elegance adopted in the assemblage of this volume 2 in the parade of 50 quintessential men and women of Ogun state is eclectic.

The profile account of the mini biographical details of the few highlighted were got from investigations, interviews of publics in vox-pop and subsisting historical knowledge of many of the personalities featured.

The authors, Dada and his gang of researchers have used evaluation, comments, attestation of the veracity of claims from the third person point of view, devoid of subjectivity and sentiments in operationalising the phrase “Role Models” in the process of research carried out on 50 Top Role Models in Ogun state.

Like the wedlock of mortis and tenon, the encomiums, accolades, showered on these people have come to engage them in a passionate kiss with history of Role Models over 304 pages of a memoir.

The who and what everyone so recognized, have been captured in the high pitched description and linguistic adroitness, gathered through investigations and narrative technique of hybridizing of every model so presented.

This evaluation of people in a life time and honour done to them by the authors is didactically instructional and could be reminiscential, supplementary of our contemporary sources of the Yoruba anthropology  that describes a person, well brought up as “Omoluabi” – The Responsible One attracting recognition  and mention.

The list is endless of pathological damage of our perception of what is right and just as against in-ordinary in Nigeria today.

“Top Role Models Memoirs” could serve the purpose of positive effect rubbing on the psyche of the younger ones who find fulfillment in emulating the “Omoluabis” paraded in this hall of fame in the field of education, top legal luminaries, industrial, business magnates with great business acumen, security and defence stalwarts, highly skilled medical practitioners, academics, fearless and public social communicators and analysts, veteran journalists, broadcaster and Town planner.

By this treat given to whom honour is due by the authors, our assailed and wounded, demoralised and seemingly despondent society may be encouraged to work towards emulation of those appraised and found worthy not only as good ambassadors of their family names but also of this country waiting for divine intervention.

However, for the attention of the authors, a good note should be taken of the packaging that makes future publications handy, firmly bound easy, durable to complement the well edited scripts in good graphics, pictures and paragraph display of contents.

Finally, various comments made on these illustrious sons and daughters of Ogun state leave an indelible impression imprinted on the reader’s mind which attests to the veracity and truism of claims by George Moore “The One Invincible thing is a good book, neither malice nor stupidity can crush it.”

PDP back from the brink but…

Omotara: A don tells the story of his life