•calls for end to stigmatization of ex-offenders 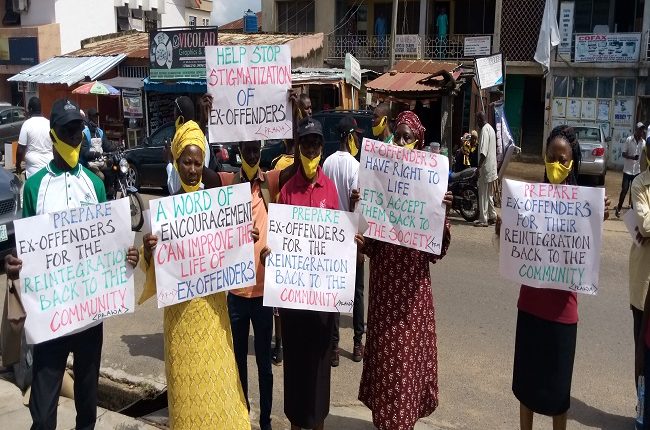 A group of professionals, retired civil servants, legal officers, among others in Kwara state, on Wednesday staged a walk around Ilorin, the state capital, to call for an end to the stigmatization of ex-convicts in the state.

The rally, tagged, Justice Walk, a Yellow Ribbon project by members of the Prison Fellowship Nigeria (PFN) and Prisoners Rehabilitation and Welfare Action (PRAWA) was taken around major roads of Ilorin such as Unity, Ibrahim Taiwo, Post Office and terminated at Offa road, as members dressed in yellow attire, urged the society to support ex-offenders on their reintegration journey from prisons.

Speaking with journalists on the sideline of the programme, the state chairperson of PFN, Mrs Adeola Ayano, said that ex-offenders, while released from prison, are often not released from the stigma of society.

Ayano, who quoted the National Institute of Justice, said that almost 80 per cent of ex-offenders will be rearrested within five years of their release.

“Fifteen years ago, the Yellow Ribbon Project was established to create awareness about the need to give second chances to ex-offenders. It is also to generate acceptance of ex-offenders and their families in the community and to inspire community action to support the rehabilitation and reintegration of ex-offenders into society.

“Everyone year, thousands of offenders are released from prison. Most leave with the hope of starting afresh and reconnecting with their families and their communities. Key to this is a chance at employment, which allows them to stand tall, be independent, and able to provide for their families. So, a job is not just about livelihood, but also about dignity.

“However, while released from prison, ex-offenders are often not released from the stigma of society. The transition from prison to working life is not easy. Quite a number of these ex-offenders have low or no education, making it difficult for them to seek employment. A criminal record compounds the difficulty to reintegrate into society.

“A lot of ex-convicts are not welcome back to society as the public sees them as an outcast that should not be welcome back to society. The community does not give them a chance to start afresh, as they believe they have no reason to be among them. This cruel attitude has made the majority of the ex-convicts to go back to their old colleagues who gladly welcome them and accept them with open hands. This in turn made the ex-convicts continue in their crime.
According to the National Institute of Justice, almost 80 per cent of ex-offenders will be rearrested within five years of their release. This is solely because they are not properly follow up or counsel and reintegrated back to the society”, she said.

Also speaking, the publicity secretary of the voluntary organization, Adeyinka Ajiboye, said that Prison Fellowship Nigeria PFN believes that everyone deserves a second chance, and one of its key tasks is to overcome the challenge of reintegration of ex-offenders and to reduce re-offending.

“Every society needs to run on the rule of law. As we know, this includes a system of penalties and punishments for acts that are detrimental to society. But such a system of enforcement of discipline also needs to be moderated and complemented with efforts for offenders to make good and rejoin society. The same consideration exists in our education system. A person’s future cannot be totally determined by his or her past.

“We should all show love and affection to all our ex-offenders, we should support them as they start a new life. We as a society should help fulfil their destinies by encouraging them and show them the way of the Lord. We should know that all ex-offenders have the right to life and good living irrespective of their past.
Let us all stop the stigmatization of ex-offenders”, he said.