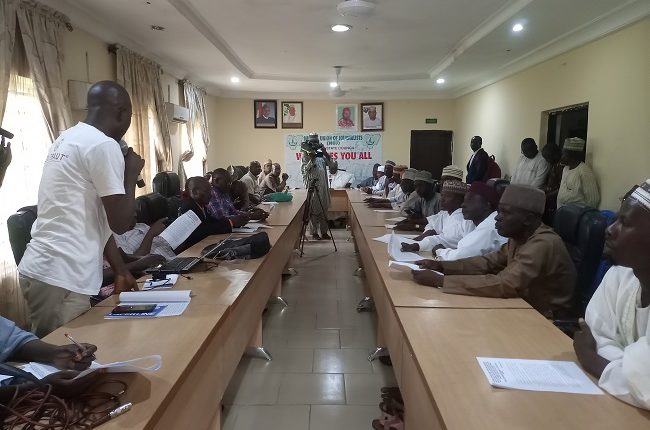 Bauchi State chapters of the 22 political parties deregistered by INEC for what was described as lack of national spread and non performance but ordered to be reregistered by the Court of Appeal, Abuja Division have called on the INEC and Bauchi State Independent Electoral Commission (BASIEC) to as a matter of fairness include their names and logos on the ballot papers for future elections.

While addressing Journalists at the NUJ Press Center on Sunday, the 22 political parties stressed that following the Court of Appeal judgment, INEC was supposed to have recognized and include their names and logos on the ballot papers without hesitation.

He added that, “After we received the court of appeals order on the 10″ of August 2020, we the 27 affected Political Parties in Nigeria, Bauchi state Chapters, approached the Bauchi State Independent Electoral Commission (BASIC) and formally submitted the Court Order to its attention and expressed our interest to participate in the forthcoming Bauchi State local government election for the post of Chairmen and Councilors as well as by Election of State House of Assembly, all relevant document were duly forwarded and acknowledged by it.”

“Furthermore, the Bauchi State Independent Electoral Commission (BASIC) directed us to furnish the Independent National Electoral Commission (INEC) and elsewhere with our request, which we complied Our greatest surprise neither INEC nor BASIEC is yet to respond to our communications, seeing that BASIEC has scheduled the local Government Election elections in October 17, 2020,” Tijjani Aminu added.

The political parties according to the spokesperson, “We the Political Parties like all other legitimate institutions are all products of the constitution of the Federal Republic of Nigeria; we are bounded by the law, we are guided by the judicial institutions, via courts judgments. We are expected to, at all time rigorously respect and obeyed court decisions, even in the events where by, the ruling goes against our wish and expectations.”

He also said that The episode of unconstitutional act of unilateral deregistration of 74 Political Parties by INEC on February 2020 was concomitantly met with legal process which the Court of Appeal finally stated the position of the Law which in summary asked INEC to allow these political parties the right of existence.

He said that, “From the onset, we political parties obeyed the INEC interpretations and the 22 of us proceeded and took further legal steps At the end, the Honorable court of Appeal interpreted the legal position bay INEC is yet to comply with the said judgment. That is to say INEC is Slatantly and reluctantly, ignoring the Court of Appeal Order.”

“After several appeals and struggles, all we are saying is requesting them to include our parties’ logos and accept our candidates in the local government election processes coming up soon. Yet all effort to consider our legitimate co-operate entities institutions proved abortive”, he declared.

The YPP Chairman added that, “We will be right to say that this government of Bauchi State is a beneficiary of the judgment of the Courts not long ago. We therefore as Nigerians and legitimate institutions expected it to respect in similar circumstance, and any judgment/ruling that comes from the Honorable Court.”

“We applauded the government of Bauchi State for is intention to bring masses at the grassroots level closer to the government, but the process must be free and fair so as not to disenfranchise others deliberately. We would further suggest to the State Independent Electoral body and INEC to obey in absolute terms, the said judgment of the Court of Appeal and avoid being in contempt of court Order,” he appealed.

Tijjani Aminu said that, “We finally, call on BASIEC/INEC as a product of law that prides tself in obeying court order to do same in this situation and without further delay. Include our names and logos in the ballot papers as bonafide parties that will participate in this local elections coming up on October 17 2020 and by-election of an honourable member representing State House of Assembly.”

He also said that, “Time is fast running out on BASIEC AND INEC, the end result would lead to court actions, we honestly believe that the consequences of refusing to include our parties Names and Logos may lead to nullification of the entire process as in the Case of recent judgment of Bayelsa State Governorship Election in September 2020.”

“In strongest terms, It is condemnable to allow the billions of naira of taxpayers’ monies to be wasted in the event that could have being avoided. It is also disturbing to any right thinking person to see and allow any process that could lead to hinder the local government elections while BASIEC and INEC remain adamant,” he warned.