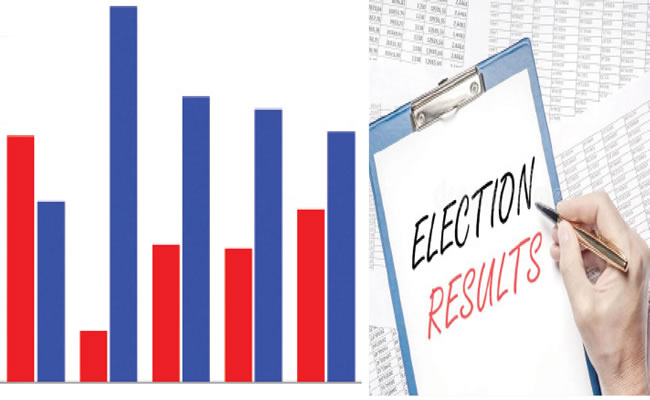 Typical of the lead up to elections across the world, polls are already predicting the likely winner of the 2023 presidential election in Nigeria. The most recent are the NOIPolls and that conducted by THISDay newspaper. The result of such polls are usually of concern to political pundits, political parties and interested members of the public. Polls provide information about how well parties are doing in a campaign. The information may affect voters’ perception of the various parties’ chances of winning an election or its chances of being part of a coalition to win an election. Polls identify the top candidates and gives reasons why a particular candidate will get votes of majority of the electorate.

Opinion polls help politicians understand what the public wants and the public understands who is popular at the ballot box. Polls also affect expectations about the outcome of elections. Polls may even lead people not to vote for a party because the party is perceived as unlikely to win. Some voters may evaluate parties positively if their chances of winning appear to be good and evaluate parties more negatively if their chances seem to be slim. The question regarding polls include whether polls merely affect perceptions of the race or whether they also affect how voters evaluate the parties and vote subsequently. There is also the possibility that when the public is told that a candidate is extremely likely to win, some people may be less likely to vote.

When predictions of the 2015 United Kingdom general election were widely off the mark, some began to question their use. While polls, over the years, have served as a reliable guide, recent failures including predictions for the 2015 UK general election have brought up questions about its reliability. The poll for the 2015 general election was considered a failure as it forecasted the possibility of a hung parliament only for a conservative majority to emerge. Similarly, the 2016 presidential election in the United States raised questions about whether polling is still up to the task of producing accurate information. Various polls before the 2016 US election projected Hilary Clinton as winner but Donald Trump won. A raft of polls showing Clinton as leading the race proved to be a mirage.

One issue that determines the acceptability of polls, usually, is their extent of visibility. Issues with polls are also the extent of the sampling error, how large the sample size is. Political pundits also note that respondents sometimes lie to pollsters. As valuable as opinion polls are, Professor JouniKuha, who is an expert in survey methodology, said pollsters need to be transparent and accurate in their statistical methodologies, if polls are to be relevant. Sometimes, the real margin of error is often about double the one reported with other important sources of error in polling: non-response, coverage error and mis-measurement not factored in.

Many a time, prediction from polls are found inaccurate because samples are mainly unrepresentative of the population of voters, leading to a polling miss. Observers note that to avoid errors, there is the need to narrow the gap between perception and reality. Another issue with polling is that polling organisations conduct their surveys in different ways with no universally accepted methodology. Some organisations conduct polls by telephone using live interviewers, some field their polls online using opt-in panels while there are those who conduct polls online using a panel of respondents recruited online. There are also those who combine two or more methods to enhance their data quality and accuracy in election.

Ahead of the 2023 presidential election, a poll conducted by NOIPolls, published August 23, revealed that 74 percent of adult Nigerians it interviewed disclosed that they are not registered to any political party in the country. According to the poll, 95 percent of Nigerians acknowledged that they are looking forward to voting in the 2023 election, with 89 percent claiming that they have registered to vote in the election.

The NOI Polls published on September 14, 2022 showed that 21 percent of voters will vote for Mr Peter Obi of the Labour Party (LP), while 13 percent each are proposing to vote for both Senator Bola Tinubu of the All Progressives Congress (APC) and Alhaji Atiku Abubakar of the Peoples Democratic Party (PDP). Dr Rabiu Kwankwaso of the New Nigeria Peoples Party (NNPP) is said to presently have three percent of the voters. However, 32 percent of those surveyed, are undecided. Analysts noted that the relatively big size of undecided voters six months to the election mean that the winner of the election is yet to be known. They note that the election could swing anywhere depending on many factors that would play out between now and the election day. As the NOIPolls indicated, the polls are to continuously be conducted as we approach the 2023 election. In a statement revealing the poll result, ANAP foundation, which commissioned the NOIpolls, noted that though the eight percent lead for Obi is significant, it is not sufficient to separate him completely from a leading pack of candidates scoring 21 percent, 13 percent and 13 percent respectively. “Undecided voters and those who prefer not to reveal their preferred candidate add up to a whopping 32 percent and 15 percent respectively. The gender split of undecided voters shows that 39 percent of women are undecided versus 27 percent of male voters,” the ANAP statement further read.  The polls showed that the top five reasons why voters were more inclined to vote in the 2023 election are: the need to tackle insecurity, the economy, education, unemployment and poverty alleviation.

But the likes of Tinubu, Atiku and Kwankwaso were quick to dismiss the NOIPolls which put Obi in the lead ahead of the 2023 election. Tinubu, picked holes in the poll, saying it is a dubious concoction. Tinubu, through director, media and publicity, APC Presidential Campaign Council, Mr Bayo Onanuga, the APC is not in any way perturbed by what he described as dubious opinion polls. Giving instances, Onanuga said the NOIPolls had been off the mark in recent times. He said: “We are unperturbed by these dubious and unreliable statistics because our research shows that NOI Polls have been off the mark at critical election periods in recent times.For example, preparatory to the March 2015 presidential elections, NOI published in October 2014 the results of a ‘Viability Poll’ which used the concepts of Familiarity and Net Favourability Position to survey. In the results, NOI claimed that President Goodluck Jonathan has the best overall familiarity rating at 99% and Net Favourability Probability of ±25. By contrast, NOI dismissed the then All Progressives Congress candidate, Muhammadu Buhari as a ‘borderline candidate’ who needed ‘huge public relations’ to shore up his performance. But when the Nigerian people went to the polls, who won? The APC candidate and now President, MuhammaduBuhari. This is not the only instance when the NOI has turned its political bias in an election period to fraudulent statistics.”

On his part, PDP candidate, Atiku, said the poll was manipulated, adding that polls that attract credibility are released with the sample size and the margin of error. Atiku’s campaign spokesman, Daniel Bwala, said, “Funny, polls are assessed by sample size and margin of errors. The Peter Obi surrogate polling company conjures something to inflate his ego and confuse voters into thinking cyber space translates to physical space. 419 pollsters. You have to look at the demographic and the place where the sampling was carried out. It was carried out online and 57.5 percent of Peter Obi supporters who followed him on Twitter are not living in Nigeria. The polling is a true reflection of that. For a candidate to become a president, he must win the majority and get 25 percent. Where Labour Party and the NNPP are seeking to make inroads, PDP is there already.”

Though political scientists agree on the crucial nature of election polls, they express their reservations regarding the polls conducted in the country and its relevance to the outcome of elections in Nigeria. Professor Dhikru Adewale Yagboyaju of the department of Political Science, University of Ibadan, held that election polls in Nigeria are hardly accurate and effective due to issues such as vote buying, poverty and low level of education. He noted that polls date back to the country’s Second Republic (1979-83) but continue to be plagued by factors such as election rigging and other malpractices.

As pivotal as election polls, senior lecturer, Lead City University, Ibadan, Dr Bayo Busari said such polls also provide opportunity for politicians to work out ways of rigging. Beyond polls, he noted that the challenge has always been whether votes will count. He added that the importance of polls in the nation’s democracy is also encircled by issues of endemic poverty, illiteracy and corruption. Busari said: “It is a fact that without poll, no government can emerge under any democratic system. The concern has always been about the credibility of the electoral process and the extent to which the electorate›s votes count, especially under the peculiar Nigerian situation. The concern is not a misplaced one, given the facts that ours is a system bedeviled by endemic poverty, illiteracy about the tenets of democracy, an ‹emperioric› political class and a system that swims with corruption.However, in spite of all these seemingly insurmountable cankerworms, the poll is pivotal to the emergence of who wins an election in Nigeria. The reason is not farfetched, without polls no politician will have no opportunity to rig. What this implies is that we need to work out ways to make rigging of the electoral process less attractive to politicians. We›re already moving in that direction with the recent reforms being introduced, only that we need to strengthen the system and resolve, across board to work towards a better polling system in Nigeria.”

On his part, an associate professor of political science, University of Ilorin, Dr Gbade Ojo said, while polls are expected to enable candidates plan strategically to win election, polls are rendered misleading when non-professionals, non-experts are behind them.

Olufemi Oluwole: A journalist remembers his contributions to the profession, political arena