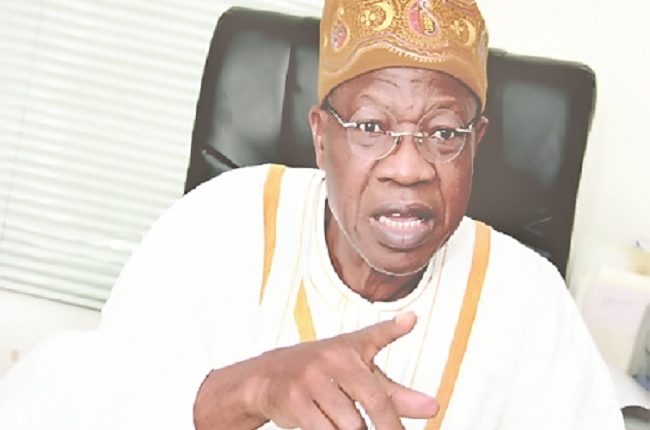 THE Peoples Democratic Party (PDP) Presidential Campaign Organisation, on Thursday, took a swipe at the Federal Government for spreading falsehood after inflicting multifaceted woes on the citizens of the country since 2015.

The campaign body particularly accused the Minister of Information and Culture, Alhaji Lai Mohammed, of lying that the presidential candidate of PDP, Alhaji Atiku Abubakar, copied the blueprint of the administration of President Muhammed Buhari as his policy document.

Describing the allegation as spurious and unfounded, the PCO demanded that the minister should tender a public apology for lying to Nigerians on the document.

The demand was contained in a statement titled: Lai Mohammed lied against truth and must apologize to Nigerians, in which it explained a government that had no blueprint from inception in 2015 could not lay claim to such document.

The government had attacked Atiku over his economic blueprint, accusing him of denigrating the administration of Buhari and copying his programmes at the same time.

Lai Mohammed, who addressed a press conference in Abuja in reaction to the blueprint recently presented by Atiku to the business community in Lagos, said that it was shocking that an opposition that had condemned the administration would turn around to copy what the government had already achieved.

He said: “Last week, the presidential candidate of the main opposition Peoples Democratic Party (PDP), former Vice President Atiku Abubakar, spoke on his Economic Blueprint at an event in Lagos.

“Let me say, straightaway, that the so-called blueprint is a crude attempt at copying all that the Administration of President Muhammadu Buhari has done, especially in the areas of job creation, infrastructure financing, relationship with the private sector, rejuvenation of the power sector, poverty reduction, debt management and the overall management of the economy.”

But the campaign organisation of Atiku berated the All Progressives Congress-led administration of Buhari of unleashing misery of an unparalleled proportion on Nigerians under what the PCO described as the “scandal that the APC has become in the art of governance.”

Expressing utmost dismay at what it also described as the very poor attempt by the minister to turn truth on its head, the organization termed the claim about the document as “a tsunami of a lie.” He wondered if it could have taken the administration half a year to set the necessary machine in motion if it had an economic blueprint at inception.

According to the organization, what the minister listed as the giant strides of the APC administration are not just the “reasons Nigerians have roundly rejected the ruling party,” but also represent “a testimonial of failures” of the government.

Part of the PCO statement read: “While the minister was making a barren attempt to catalogue perceived achievements of the current APC administration, he did the unbelievable by claiming that the policy documents and proposals espoused by His Excellency Atiku Abubakar, our presidential candidate, are the version of the economic blueprint of the APC. That is a tsunami of a lie!

“To begin with, it has been openly acknowledged that this current administration came into power without a single sheet of paper of what could be called a policy document.

“Nigerians are aware that in both 2015 and 2019, it took the APC six months and three months, respectively to constitute a cabinet.

“Perhaps, the minister might be interested in telling Nigerians if it is also part of the APC manifesto to footdrag in forming a government.

“It is on record that the first economic recession that the country experienced in 2016, which happens to be our worst economic decline in 30 years, happened primarily because the APC administration applied what can be called a catch-up strategy to the early signals of the recession.

“That is why till this day, Nigerians are more agreeable to the fact that the tenure of the APC has been nothing but a sheer waste of time, all thanks to the catch-up economic strategy of the ruling party that has left the people more malnourished, sick and disillusioned.

“The poor records of the APC in the areas of economic management, jobs creation, education, security and in virtually all spheres of our national life is the reason why there is a lot of anxiety about the 2023 general election.

“Indeed, it needs to be stressed that next year’s election will be a referendum on the APC and it is not in doubt that the ruling party in Nigeria will present a global case study of how a political party can lose popular goodwill within a short period of time.

“Nigerians of all hues, both the rich and those that are not; the educated and those who are not; the elderly and the young are all witnesses to the scandal that the APC has become in the art of governance. “Nigerians are rallied in their frustration in the APC and the promise of a better future that our presidential candidate, Atiku Abubakar holds for the country after his victory in the 2023 presidential election.

“What Minister Lai Mohammed reeled out as achievements of the APC is a compilation of the reasons why Nigerians have roundly rejected the ruling party.

“It’s nothing but a testimonial of failures. Conversely, what His Excellency Atiku Abubakar presented to the organised private sector in Lagos State last week represents the hopes of a new beginning, which Nigerians eagerly anticipate.”

“Therefore, for anyone using this as a campaign stunt, without acknowledging what we have done so far, is cheap and disingenuous.”

“Indeed, the Buhari administration has long broken that jinx, leveraging on such innovative schemes as the Presidental infrastructure Development Fund.”

Mohammed continued: “In the area of power, ex-Vice President Atiku said ‘investments in additional generation capacity are futile without consideration for the complementary transmission and distribution infrastructure to wheel the additional energy.’ He then promised to propose legislation to, among others, give states the power to generate, transmit and distribute electricity.

“It is apparent that AlhajiAtiku has either not heard of the Siemens partnership with the Federal Government under the Presidential Power Initiative, the most ambitious project yet in the efforts to improve the seemingly-intractable power sector on which the PDP frittered over 16 billion dollars to procure nothing but darkness.

“The Nigeria-Siemens partnership was consummated with the signing of the Implementation Agreement on July 22nd 2019. The three phase project will deliver 7,000MW in the first phase, 11,000MWin the second phase and 25,000MW in the third phase.”