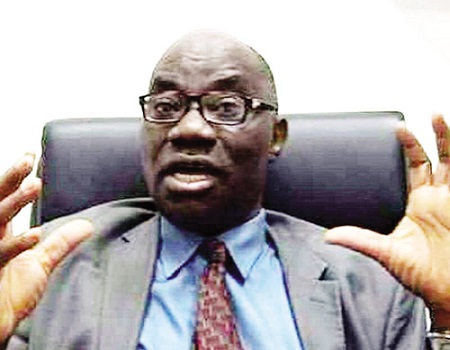 The Nigeria Electricity Regulatory Commission (NERC), on Wednesday, said that it requires a whopping sum of N2billion in the 2021 budget, to partition and furnish its headquarters in Abuja.

The Chairman of the Commission, James Momoh, disclosed this when he appeared before the House of Representatives Committee on Power, to defend the Commission’s 2021 budget proposal.

The NERC Chairman said the partitioning and furnishing of the eight-floor headquarters building became necessary to make the building befitting and habitable after it was acquired.

According to him, “works on the building has been ongoing, which made the Commission to propose fundings for it in the 2020 and 2021 budges.”

Momoh also told the Committee that the Commission was unable to spend all the money released to it for the project in the 2020 budget because of the COVID–19 pandemic.

However, a drama ensued when the committee demanded to know the total contract sum to complete the partitioning and furnishing of the office, as the Commission was unable to provide the same.

The committee then expressed worries that the Commission was seeking N2billion to partition and furnish an office, in 2021 budget, but could not say what the contract sum was.

The following were the verbal exchanges between the lawmaker and the Commission’s officials.

Chairman: What is the contract sum?

Momoh: I don’t have the original contract sum but it’s being done on yearly basis. We can provide that if you need it.

Accountant (Opts for details instead): This contract has 8 floors…

Chairman: Please, we know your office. It’s a simple question. You are partitioning your office. What’s the contract sum?

Accountant: There is no contract sum for all. We have been given permission to do it as the funding…

Chairman (interjects): Who gave you permission? So, you don’t need N2bn. If you don’t have a contract sum.

Accountant: This is an estimate, sir. The contract is given in lots. Maybe, this is lot one to address the first floor, maybe lot two, as the funding becomes available.

Chairman: In lots? My friend, you are confusing us. I need the budgetary approval for your work. If you don’t have contract sum, we will delete this from your budget and you have zero. You have only one line item budget and you appear unprepared. So, you should go and come back.

Following this development, the Chairman of the Committee, Rep Aliyu Magaji, threatened to delete the request from the 2021 budget proposal.

According to him, “If you don’t have the contract sum we will delete it from the budget. You have only one line item and you came unprepared. So you should go back and bring the total contract sum.”

Earlier, in his remarks, the Chairman of the Commission, Momoh had lauded his agency for the unusual stride recorded in the area of mass metering of electricity consumers in the country assuring the Committee that the era of estimated billing in the country was over for good.

According to him, “metering issue as you know, we have had a lot of discussion in the last several months. Yours truly has been in the meeting with the labour unions and the government side of options that are necessary to make to respond to where there are lacuna or gaps, especially in the metering.

“The one million number type roll plan between now and the first quarter of 2021 is on course. We have the time table. We have identified what is to be given to each of the Discos for their customers.

“It means that the meters that will be rolled out are already completed and guaranteed. We call it to phase zero option. In that phase zero, customers are going to receive meters from each of their franchising Disco company. Phase one and two will be when we roll out 6 million. Maybe, by 2022, we would have rolled out.

“They will receive all these meters: single face in their homes. But somebody is going to pay for it. Government is going to give loan to make sure that Discos will have access to these meters through local manufacturing. Obviously, it is a good one to create jobs for our people.

“And of course, NERC’s role is well defined. We are monitoring. We will evaluate and make sure that proper roll-out plan is in place to meet the standards and specifications on which the metering codes are approved.

“I think we are in the right time in the country when you can always say to each other that the era of estimated billing is gone and customers will be for the power they use and they will be able to manage the power so that they won’t pay the excess and won’t be wasting energy as well. But the most important thing we have accomplished is that for the first time in Nigeria, we have created, under my watch actually, what I will call a new paradigm shift that the customer only pays for the quality and availability of power they use. And I as a customer can reduce consumption. I think it is a good thing. It will also lead to the industrialisation of our country and investment in the electricity sector will now be easy to come.

“So, I think the metering issue has been a problem because it causes a lot of technical and commercial losses. But I think, it is over now.

“By the special Grace of God, within the next two years, meters up to 6 million that are gapped are being fixed because of the presidential initiative that has provided these meters to us. It will no longer be a burden on the customer in terms of payment because the money is coming through loans to the Discos from the government, CBN, world bank. So, combining all these, the customer will be happier than ever because the era of estimated, bogus billing which you have been against is gonna be over.

“Even for those customers who may not have meter tomorrow, we have an order that suggests a cap on how much that customer should pay so that he or she is not abused by lack of meters.

“The intention is that the country will see a new dawn. The electricity market for the customer will be defined as I pay for what I use and I pay for availability and quality of power. Please join NERC in presenting our argument.

“Service-Based Tariff, SBT is a response to one question. What do you need in terms of electricity in Nigeria? We need quality of electricity. That is what that has driven a new paradigm shift,” he said.