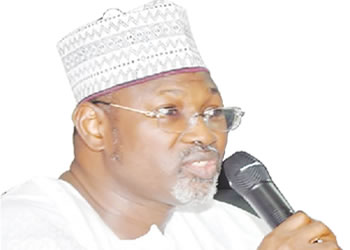 AHEAD of the 2019 general election in the country, former Chairman, Independent National Electoral Commission (INEC), Professor Attahiru Jega, on Thursday called for genuine volunteers to ensure the credibility of the exercise to prevent corrupt politicians from compromising the electoral process.

Jega made the call in Lagos at a lecture organised by the University of Lagos Muslim Community in collaboration with Muslim Ummah of South Western Nigeria and Unilag Muslim Alumni, saying this was necessary because the said corrupt politicians were beginning to find creative ways to compromise Youth Corps members, members of Civil Society Organisations (CSOs) and some students involved in election duties.

He said beyond that, the same set of politicians were also making their ways to compromise members of the academia who serve as returning officers during elections.

The former INEC boss, who spoke on the theme, “Prospects and Challenges of Involving Volunteers in Nigeria Electoral Process,” while emphasising the need to ensure credible poll by ensuring that only people of integrity were allowed to serve as volunteers during the poll, also advocated reform of the electoral process.

According to him, the reform should allow election volunteers, security agencies and other officials, including journalists who are usually on duties during an election period to embark on early voting.

This, he said, should be allowed in order not to disenfranchise them from performing their civic duties

“Corrupt politicians are beginning to find creative ways to compromise Youth Corps members and some students involved in election duties. They are even increasingly penetrating and compromising seemingly credible CSOs.

“Similarly, as the use of academic staff as collation and returning officers has become predictable, corrupt politicians are increasingly snooping around university campuses and INEC offices, especially over governorship elections, inducing lecturers with humongous amounts of money with the hope of compromising their role in result collation and tabulation.

“So far, there is no evidence that they have succeeded, but the tendency is increasing and is of great concern. The pool of potential credible collation officers and returning officers may perhaps need to be expanded to incorporate selected professional groups, to minimize the predictability of using certain universities and their staff and make it more difficult for crooked politicians to infiltrate and compromise the process,” Jega said.

The former INEC boss, while, stressing the need for volunteerism in the electoral process, added that there was a need for the reform in order that the credibility of the election to be guaranteed.

“As Nigeria strives to leave behind its unenviable history of poorly conducted elections and makes progress in the direction of electoral integrity, an important issue to be addressed as we move towards the 2019 elections relates to how to expand the scope of the participation of citizens generally in the electoral process, and specifically how to increase the positive role of volunteers: for example, how to minimize or eliminate the challenges, which arise with their participation and how to ensure that their participation adds tremendous value to the integrity of Nigeria’s elections.

“The case for the increased role of volunteers in the Nigerian electoral process cannot be over-emphasised. It is necessary and desirable and if appropriately deployed can add tremendous value to having elections with integrity, with positive spin-off effects on good democratic governance.

“Since Nigeria and Nigerians have chosen liberal democracy as the political and governance system, citizens’ active participation and constructive involvement are prerequisites for its entrenchment, stability and legitimacy.

“However, to maximally tap the benefits of volunteerism in the electoral process, urgent reforms are needed leading to 2019 general elections, to reposition the continuous role of members of the NYSC and academics; to open avenues for additional groups of professionals, such as engineers, doctors, journalists, etc., to join academics; and slowly and steadily set up measures that can move in the direction of recruitment of volunteers using a database of all those who have done election duty before, even when they have moved out of the NYSC or universities as students,” Jega said.

Jega also called on INEC to ensure that it paid even more attention to the identification and selection of credible individuals and CSOs, as volunteers and partners in order to bring about improved electoral integrity in the country.

“INEC, as the EMB, needs to pay even more attention to the identification and selection of credible individuals and CSOs, as volunteers and partners for bringing about improved electoral integrity,” Jega said.

There was no N42bn contract scam in Power Ministry ―Fashola