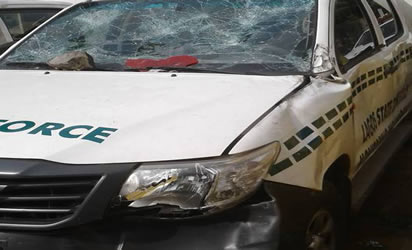 Tragedy struck on Wednesday night as two officers of the Lagos State Taskforce on Environmental and Special Offences (Enforcement) Unit died in a ghastly motor accident in Alausa due to over-speeding.

The fatal accident occurred within in a short distance of about 500 metres between the Agency’s office in Alausa and the State House of Assembly, according to a Taskforce source.

Nigerian Tribune Metro gathered that one of the officers died immediately while the second died in hospital on Thursday with the incident said to have thrown the Taskforce headquarters in a mourning mood.

The driver of the vehicle, a source said was a police officer who was not supposed to drive as there were drivers designated to drive the Taskforce officers whenever they were going on operation.

Taskforce Chairman, Yinka Egbeyemi, when contacted refused to comment on the matter, saying that he was not permitted to talk on the matter.

He directed that all enquiries should be  made to the Police Public Relations Officers (PPRO) in the state, Dolapo Badmos, on the matter.

Badmos said she was not aware of the matter when contacted.