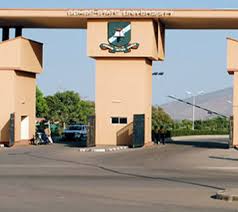 51 First Class graduands of Gombe State University (GSU) have been offered automatic employment by Access Bank of Nigeria Plc as a way to motivate them to be more industrious to the economy of the country.

The Managing Director and Chief Executive Officer of the Access Bank Nigeria PLC, Mr Herbert Nwigwe announced the offer of the appointment of the 51 first class graduating students during the graduation ceremony of the University Saturday.

Herbert Wigwe who was among three other eminent Nigerians that were conferred with Honorary Doctorate Degrees by the University during its 6th,7th 8th and 9th combined convocation on Saturday in Gombe said the Bank will be willing to offer them appointment if they will accept the offer.

While speaking on behalf of other awardees, Herbert Wigwe who was conferred with Honorary Doctorate Degree of Administration commended the University for the remarkable achievements
“In spite the security challenges in the sub-region just as he commended the State Government for putting up remarkable infrastructure in the institution despite having little resources.”

He also congratulated the graduands for the feat they achieved in their academic pursuit and assured them that with perseverance, they will have a great future ahead of them.

He said, “a journey of a thousand miles begins with a step, it may take some of you several years after graduating to settle down though.”

A total of 3,958 students graduated in various courses of study as well as postgraduate studies.