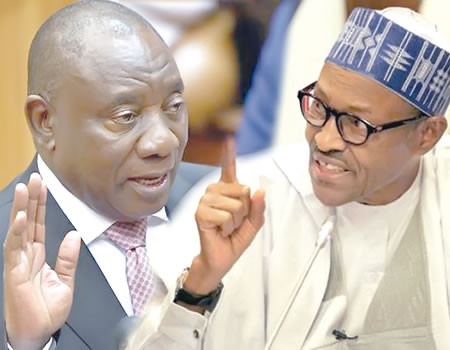 I have already analysed the ugly spectre of South Africa’s killing, maiming and looting of properties belonging to foreigners, especially Nigerians. It did not occur to those African brothers and sisters that Nigeria and Nigerians championed their independence and freedom from a rampaging, but powerful minority government during the apartheid. Without Nigeria and such African countries, South Africans would perhaps still be in the doldrums and in bondage. Can South Africans simply carry out these destructive acts without any form or restitution? Let us go see the provisions of Article 45(1)(b) of the African Charter on Human and People’s Rights, which mandates the Commission to ‘formulate and lay down, principles and rules aimed at solving legal problems relating to human and peoples’ rights and fundamental freedoms. In 2006, the protective mandate of the African Commission was complemented by the African Court on Human and Peoples’ Rights (African Court). Significantly, the material jurisdiction of the African Court extends to all ‘human rights instruments ratified by relevant States. The Protocol establishing the African Court has been ratified in both Nigeria and South Africa.

If the court finds a violation of a human right, it is empowered to ‘make appropriate orders to remedy the violation’. A remedy may be considered ‘appropriate’ if it is ‘adequate, effective, promptly attributed, holistic and proportional to the gravity of the harm suffered’.This includes the payment of ‘fair compensation’ (whether provided in the form of money, goods or services), or adequate ‘reparation’ (restitution, reinstatement). Other possible remedies the court may grant, based on the practice of other human rights bodies, include rehabilitation (medical and psychological care and other social services); orders of investigations and prosecutions of perpetrators when human rights violations occur in conflict or post-conflict contexts; mandate institutional reforms, repeal discriminatory legislation and enact legislation providing for adequate sanctions, guarantees of non-repetition. Judgments and orders of the court in contentious proceedings are legally binding. Thus, state parties are required to ‘comply with the judgment in any case to which they are parties within the time stipulated by the Court and to guarantee its execution’. Execution of judgments is monitored by the Executive Council of the AU on behalf of the AU Assembly. The Assembly is empowered to impose sanctions or take ‘other measures of a political or economic nature’ against states that do not comply with the AU ‘decisions’. Such decisions include the court’s judgments and orders of provisional measures. South Africans must therefore translate into action the words of President Ramaphosa that: “Attacks on foreign nationals is something totally unacceptable, something that we cannot allow to happen in South Africa.” Did he really mean it? It is not enough simply to identify the problem. We must forge ahead with reasonable solution. There must be remedy for a legal wrong (ubi jus ibiremedium). So we must alleviate the pains of victims who have suffered serious hardships, economic loss, and all kinds of horrors.

Xenophobic violence is deeply rooted in South Africa’s historical legacies and contemporary institutional configurations. Government, the civil society, and international organisations must work together to finds ways of replacing vigilantism with vigilance and power vacuums with a leadership committed to inclusive, equitable, and law abiding communities. It is not only non-nationals’ welfare that depends on the success of these efforts. Without mechanisms to address conflict and exclusion, we risk the security and dignity of all South Africans living in the country’s townships and informal settlements. If supported by political will and resources, the following recommendations which have been proffered by some concerned people may help to counter xenophobic tendencies and reduce the risk of future violence:

1. Develop interventions to promote accountability and counter a culture of impunity: There is little hope of reforming corrupt and potentially violent leadership structures if guilty parties continue to reap rewards for their misdeeds. The South African Department of Justice together with the Department of Provincial and Local Government (DPLG), and the National Prosecuting Authority (NPA) should lead an initiative to prosecute community leaders and others involved in the xenophobic violence and to strengthen justice mechanisms to protect the rights of minority and marginalized groups. Such an initiative should begin with an official Commission of Inquiry — potentially by the South African Human Rights Commission, or another constitutionally mandated body — to identify guilty parties and unacceptable practices. Further efforts will lay criminal charges against official and unofficial leaders who use their authority to promote violence and illegal activities, or employ crime prevention and conflict resolution mechanisms that do not respect the rights of all community residents.

2. Encourage CSOs and effective electoral system. However, criminal prosecution on its own will not be enough: Resources and mechanisms should be put in place to encourage existing civil society organizations to support the rights and welfare of non-nationals along with other marginalized and vulnerable groups. In the short term, election-monitoring mechanisms should be put in place to ensure that officials are not elected on an anti-foreigner/ anti-outsider platform.3. Promote positive reforms to build inclusive local governance structures: As much of the violence is rooted in exclusive local politics, DPLG and others should identify and promote positive leadership models and leaders committed to tolerance and the rule of law. In all cases, interventions must be wary of empowering ‘unscreened’ community leadership structures such as street committees and other forums. Doing so may entrench the power of the same unscrupulous leaders who were responsible for the violence or promote others so inclined.

Instead, we must support positive examples like those in Alexandra and Tembisa where community leaders successfully mobilised their constituencies to prevent the violence.

Mechanisms within the public administration and political parties should encourage such efforts to build more inclusive and rights-based forms of governance. Doing so will require more inclusive community justice mechanisms, a more effective and responsive police service, and legal support for disenfranchised and marginalised groups. I hope President Buhari, like his handlers, is not of the opinion that the governors of the respective states of the victims should speak up or protect their citizens. After all, all we hear from president’s handlers each time we complain of the sorry state of affairs in Nigeria, is that we should leave the president alone and focus on state governors, local government chairmen and councilors.

All that we ask for is respect for fellow Africans. We utterly condemn the actions in the spirit of brotherliness and the African Continental Free Trade Area (AfCFTA). We demand that African nations rise up not just to condemn these acts, but put measures in place to forestall future occurrences. I condemn these savage attacks and gruesome violence meted on Nigerians living in South Africa in their entirety.