Why you should not be angry 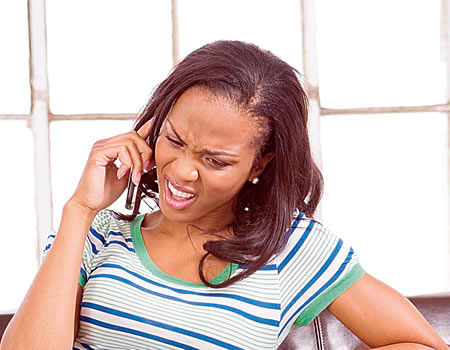 Aside from the fact that it’s never good to get angry with someone or with you, harmful effects of anger can also damage the body. In this report by SADE OGUNTOLA experts say that not keeping calm can trigger a heart attack, among others.

A man, who was engaged in a fight with his neighbour in Isaba-Ekiti, Ekiti State allegedly chopped off the left wrist of a pregnant woman, Aisha Adam, with a cutlass. There was a quarrel between the woman’s husband and her neighbour. Both men in the process brought out cutlasses from their rooms to fight. But in the process, one of their wives, a mother of four, who tried to intervene had her arm chopped off.

Mr Haruna Adesida was arrested on charges of aggravated battery, fleeing and eluding police, after he allegedly rammed his vehicle into another car in apparent road rage incident in Lagos.

He took off when he realised that passersby wanted to hold him down and hand him over to the police.  Police said he was eventually taken into custody, not before putting up a fight.

Everyone feels angry at times

Anger itself isn’t a problem. It is the body’s natural protective response when sensing danger. By automatically releasing adrenalin, tightening muscles, increasing heart rate and blood pressure, increasing blood flow to major organs, and intensifying senses, the body prepares for fight or flight.

Your anger affects you

Anger is natural, but it is also one of the most toxic emotions that individuals can have. Expressing anger in reasonable ways can be healthy, but in explosive people or those that experience prolonged bouts of anger, its implication is far reaching. It can take the toll on their body.

Research also shows that even one five-minute episode of anger directed at oneself or at other people, can impair the immune system for more than six hours.

In fact, researchers at the University of Sydney and Royal North Shore Hospital in Australia warn that angry outburst could trigger heart attack within hours.

Moreover, such events that can trigger  patients’ anger-triggered heart attack, according to the study included arguments with family members and other people, work conflicts, and road rage.

“Intense anger may make the blood pressure to go up in persons that are hypertensive who do not comply with their medication,” said Dr Moronkeji Komolafe, Obafemi Awolowo University Teaching Hospital (OAUTH) Ile-Ife, Osun State.

According to Dr Komolafe, “usually such a person would have been having headache even as the blood pressure  rises and then a blood vessel can burst. This is stroke, if the blood vessel that burst is in the brain.”

Anger can affect any part of the body because in the process, the sympathetic nervous system is activated. “When angry, the body is under stress; in the mode to run away to avoid the danger. In anger, this state is continuous and this can cause harm to the body,” she added.

Some of the short and long-term health problems that have been linked to unmanaged anger include headache, digestion problems, such as abdominal pain and ulcer, insomnia, increased anxiety, depression and skin problems, such as eczema.

Unfortunately, she said in many cities, high stress level can  make  people to burst out in anger.

“So many people because of poor finances, office deadlines, and lack of basic amenities like electricity are perpetually irritable and angry.

“This does not help their health. So, anger can contribute to a lot of diseases and eventual short change a person’s life,” she said.

Moreover, a University of Michigan study done over a 17-year period found that couples who hold in their anger have a shorter life span than those who readily say when they’re mad.

In one study, Harvard University scientists found that in healthy people, simply recalling an angry experience from their past caused a decline in body’s defence against infection.

When anger is deemed unacceptable

Of course, everyone can be angry, but it is not good when it is abnormal because it could be deleterious both to the person and others around.

Dr Oluyinka Majekodunmi, a consultant psychiatrist, Neuro-psychiatrist Hospital, Aro, Abeokuta, Ogun State stated: “Anger is an emotion; it could both be normal and abnormal. What is not good for anyone is dysfunctional anger since such may be deleterious to that person and others.

“Such a person may begin to destroy properties, injure others, destroy relationships, and   cause job loss aside the anger’s bad effect on the heart and other organs of the body.

“Much more, the consequences of bad anger is not just on physical health, such as heart attack, ulcer, high blood pressure and stroke, it may have social and psychological consequences such as depression, anxiety, as well as cause some form of adjustment disorder.”

According to Dr Majekodunmi, “anger can be a symptom of some mental disorder as well as a reaction to many environmental factors. For instance, survivors of Boko Haram and other violence could have anger built up in them.”

In a 2012 study published in the journal Cognitive Behaviour Therapy, researchers declared that anger problems can make anxiety worse. They found that anger can exacerbate symptoms of Generalised Anxiety Disorder (GAD), a condition characterised by an excessive and uncontrollable worry that interferes with a person’s daily life.

Not only were higher levels of anger found in people with GAD, but hostility — along with internalised, unexpressed anger in particular — contributed greatly to the severity of GAD symptoms. Likewise, numerous studies have linked depression with aggression and angry outbursts.

Doctors already recognise anger’s role in contributing to conditions like backaches, headaches and arthritis. Researchers at the St. Louis University School of Medicine have shown that people who tend to bottle up their anger may be more likely to suffer from chronic headaches.

Fortunately, there are some ways to overcome anger in your life.

From your subjects to your majesties – A labour day message

Why beetroot is good for heart failure patient

Dementia cases set to triple by 2050