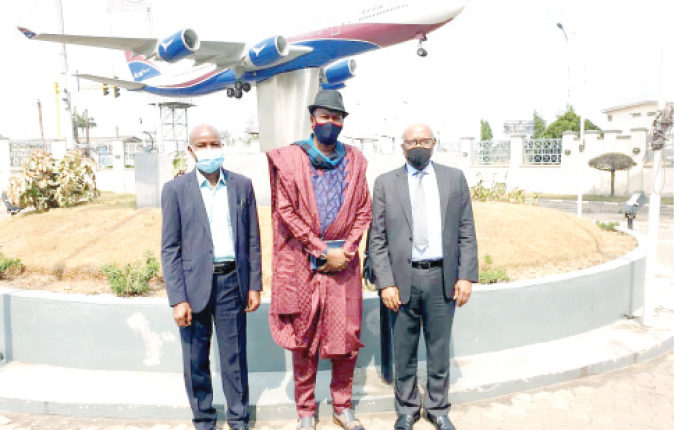 The CEO of Arik Air, Captain Roy Ilegbodu, has made case for the immediate vaccination of Aviation workers as frontline workers, saying this will help keep the country’s economy running and enable more people to travel knowing they are safe.

Ilegbodu made appeal when he hosted the Publisher of Atqnews and Travellers Magazine, Ambassador Ikechi Uko, at his office.

Ikechi Uko was at the Arik air Head Office in Ikeja Lagos to personally deliver an invitation for the annual Abuja Jabamah travel event coming up on the 27th of March in Abuja and to equally notify the airline that Atqnews/Travellers had chosen Arik Air as the Nigerian Airline of the Decade 2010 to 2020.

Ikechi justified the choice of Arik which started operations in 2006 as the Airline of Choice based on identified reasons ranging from the airline being the once Biggest Airline in West Africa with 30 Aircraft in its fleet and flying to London,UK New York, USA,Johannesburg, South Africa, Dakar, Senegal,Banjul, Gambia,Accra, Ghana and Dubai,UAE along with numerous domestic operations.

Today it flies mainly within Nigeria. From the fleet it inherited, many aircraft are grounded but effectively using six aircraft. Since AMCON took over the airline in 2017, many of the leased aircraft have been returned to the owners or have been repossessed through court orders.

While four planes were returned to France with two classic airplanes abandoned in Europe and seized by a European supplier, out of the two A340 planes one is parked at the Airport in Lagos while the other is in storage in France.

Three of the airline aircraft were recovered by the Canadian Export Development Bank just as Lufthansa is attempting to confiscate another of the airline’s B737-800 that went for C-check in Lithuania.

While another of the airline’s B737-800 is abandoned in South Africa, so many of its creditors are trying to seize as many of the assets they could lay their hands on.

Arik is in receivership and inherited 2500 staff but now has 1600 on its payroll. Out of which 900 of the workers are at home because of the Covid-19 lockdown fallout.

Some are getting called back as soon as more activities are added. They are paid some allowances while at home.

“The airline has so far proved resilient. It has also demystified the myth that no Nigerian airline with 10 aircraft lasts beyond 10 years”, Ikechi declared even as he hoped that Arik recover and grow back to be the pride of Nigeria that it used to be.

In his response Capt Ikegbodu thanked Ikechi and his team for the honour and promised that Arik Air would attend the awards in Abuja and commended them for their consistency in promoting travel and tourism in Nigeria.

$500m Chinese loan: Why FG should bear the financial burden—ANAP