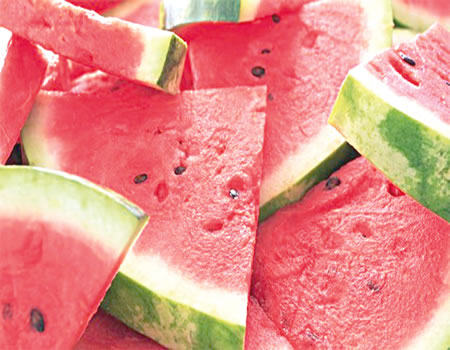 Watermelon intake has demonstrated effects on blood pressure regulation along with other health benefits. Even consuming watermelon frequently as a dessert, fruit salad and in garnishing drinks could remediate metabolic complications that come with junk foods and a Western-style diet high in fat.

Experts, in a new study, said supplementing a diet high in fat with watermelon as a dessert, fruit salad and in garnishing drinks diet improved fasting blood glucose, circulating insulin concentrations in the blood, and changes in liver metabolite accumulation.

Even with a modest level of supplementation, the fiber-rich additives further improved glucose breakdown and energy efficiency. It was in the March 2020 edition of The Journal of Nutrition.

A plethora of evidence shows that it can be effective for weight loss because of its fewer quantities of fats.  As a result, the consumption of watermelon provides long-term health benefits such as reduced risk of heart disease, improved blood pressure in hypertension patients and decrease low-density lipoprotein (LDL) oxidation.

The researchers had assessed the intake of watermelon in high-fat–fed male mice. Ten-week-old male mice were provided either a low-fat diet or a high fat diet with watermelon skin or watermelon skin and rind were added at 2.25 per cent of diet. Body weights, food intake and glucose tolerance were determined.

Moreover, in another study researchers had corroborated the antidiabetic potential of watermelon juice in alloxan-induced diabetic rats and declared that its juice may have a useful clinical application in the management of diabetes mellitus and its metabolic complications if developed as adjuvant therapy.  It was in the April 2020 edition of the Journal of Diabetes & Metabolic Disorders.

The watermelon juice exhibits anti-oxidant properties in a dose-dependent manner. Added to this, the administration of different doses of the watermelon juice significantly reduced the fasting blood glucose level, level of fat in the blood and glucose-6-phosphatase in these rats made to develop diabetes under laboratory conditions.

They added “all three groups have the same ability to reduce blood pressure, but the watermelon-star fruit juice group can reduce high blood pressure (hypertension) to become normal (norm tension).”

Help, my son is using drugs