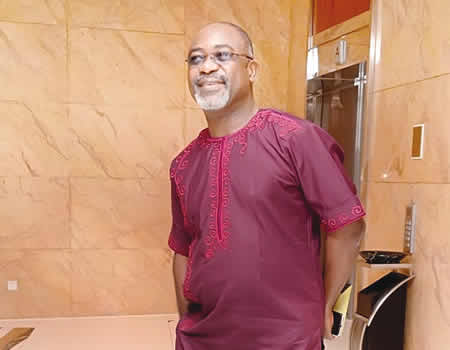 With an acting career spanning over three decades, veteran actor, Bimbo Manuel, keeps getting better with different movie roles. Days back, his stage play, ‘Alhaji’ was premiered which centred on sexual performance. He opens up on why he decided to opt for a stage play and his journey so far in the entertainment industry in this interview with ADEOLA OTEMADE.

Your new stage play, Alhaji, was well received by the people at the premiere. The movie focuses on erectile dysfunction. What inspired this?

Quite a number of things actually inspired it. In the first place, men are rarely talked about and it’s almost as if they don’t have any problem. In fact, you hear women say they don’t have problems. And then of course, I sat with some of my friends at a social outing and I heard the tone of their conversation about their sexual performances, their abilities, their endowments and so on and I wondered really if it can all be true. They were saying some extremely fantastic things you were forced to paint images in your head and I found it extremely amusing. So, I thought I could write something about it. Something we can all laugh at ourselves, the boast, the secrecy, the shyness about it. Men don’t talk about these things, even the closest of friends talk about it amongst themselves so I thought I would do something about it.

Why did you decide to show it as a stage play?

My natural first choice for projects like this is stage play. We can get more spontaneous reactions from the audience; we can also get an opportunity to generate conversations behind it. An active audience who can pull you aside and want to talk about it; everybody has an opinion about these things. It’s like an evangelism of its own kind because in discussing it, even when people are not admitting the problem, they share their experiences. You will get instant reactions from the audience when you have a stage play. Stage play became a first choice for us because if we write projects like this and we keep it on our laptops or in our lockers in the house, it doesn’t serve any purpose. It does not make sense if it does not get out and connect with an audience. Of course the shortest route is a stage.

But why are stage plays not very common like those days?

Stage is extremely organic; it is real. It connects more with the audience instantly. People will have conversations in the hall; you won’t even hear many of what is being said. People would go away with something; the conversation will extend as far as on social media.

Are you going to be reviving the stage play knowing that stage play these days is relatively going into extinction?

It will not be entirely true to say that stage performances are dead. There was a time that there was a hiatus; there was a break. But at least in Lagos, stage is more active now and it is constantly growing. Look at the Christmas period till the first week of January, there were performances at almost all the venues in Lagos. So it is already back, it’s going to get bigger; it’s going to get better. It’s going to reach wider territories. And I also know that in Ibadan as well, the department of performing arts at the University of Ibadan has been very active; they have been putting up plays even inside town in Ibadan. Things are happening in Abuja as we speak, in Port Harcourt also. It is not dead. It is just that it has not found its own dedicated audience yet, and therefore we have not been able to expand it in a way it becomes a fad like movies, TV shows and so on, but it is coming back and it is very big.

How were you able to choose your cast amidst numerous actors and actresses?

As you would have seen during the performance, everyone was carefully chosen for their craft. First, for their characters, and then we needed to consider the availability. We needed to consider all of that. And we got lots of help; contributory help, pectoral help from Bolanle Austin-Peters who is the executive producer of the show. It was a collective effort, and I am glad we were able to work together well. We have Hilda Dokubo, Monalisa Chinda Coker, we have Tunji Shotimirin, I played in it. We have Yinka Akanbi. So, we got quality people.

It has been argued that Nollywood movies lack content and professionalism. How would you react to this opinion?

I think we are actually getting better now, to be honest, because there is a difference between professional craft and professional behaviour. If we are talking about professional behaviour, that’s on a different level, because it’s character we are talking about here. You can’t help people if their characters don’t fit into the course you have created, for the kind of people you want to work with. But do they fit the role that you want them to play and can they deliver it professionally? I think yes. Do we have quality cameramen, quality directors of photography? I would say yes. Do we have good sound people now? I would say yes, better than yesteryears. Do we have better editors now? I would say yes, even set, make-up, props, special effects and so on. I think we have more people, and we are better quality now. So, it would be a bit difficult for me to say now that there is no professionalism. If we are qualifying it in terms of people’s morality, it’s a different thing, but do they come with work, with good craft? I would say yes.

You have been into acting since 1986, what are the changes you have seen in the industry?

For me, personally, it’s just a concern. Apart from being an older person now, the concern that I have is that we do not seem to have many people or enough people in my age bracket who can step up to the baton plate; those who can take up the responsibilities as stories demand. Sometimes, I have heard people, producers, directors and writers say that when they write these things for people of certain age bracket, there is nobody to play it. There are not enough people to play it.Who are the people you have in that age bracket? If you talk about myself, Akin Lewis, Zack Orji and Olu Jacobs, who is ahead of us. You see how we struggle to even name actors and actress in that age brackets. It’s hard. And in the industry generally, I think we have had some really improvement; the stories are stronger now. They are more topical now. The ones that are going into the cinema are also very good movies. I also feel the technology has been of a great help; we are not filming on the same format anymore. We are not editing on the same format anymore and even broadcast and exhibitions in cinemas. Its different, it’s probably more interesting now, of course we would still be nostalgic. Those years, when we were used to a particular way of filming and acting, we had to give to the people who run the business now, they have helped to push the envelope and the challenges is all the way across the industry. Everybody is challenged.

For you to have stayed this long in the industry, it must have come with a number of challenges. How has it been easy for you to remain relevant?

Relevance is relative because I trained on stage as an actor, so I am able to find engagement on stage. When I am not working in front of the camera for film or for television, I am on stage playing and being engaged constantly. That kind of engagement also helps to improve my craft. Whether you like it or not, there is no finished actor, you are only as good as your last show. You are only as good as your last gig. You need to keep doing it and doing it. You need to keep challenging yourself to get better. Without that kind of effort, you can easily slide into irrelevance.