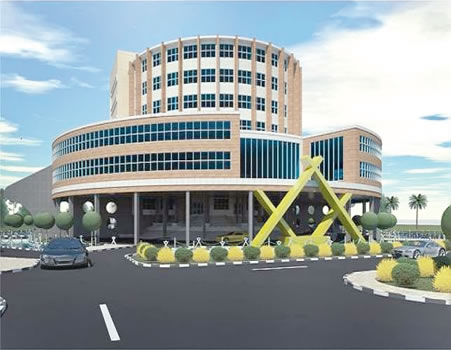 Recently, the Nigerian Army posted a message on its official Twitter handle notifying the public about the postponement of the “Ground Breaking Ceremony of the Nigerian Army University, Biu earlier scheduled for Tuesday 30 October 2018.” It was my first time to learn that the army even had a plan of establishing a university. When I tried to Google it up, I read from the webpage of NAN (News Agency of Nigeria) that the army secured approval for the establishment of its own university in March this year. The approval was given at a meeting of the Federal Executive Council chaired by Vice President Yemi Osinbajo following the recommendation of the Ministry of Education. In a briefing after the approval, Mallam Adamu Adamu the education minister stated that the newly approved university “will be the hub for developing a Nigerian Military Industrial Complex.”

In the NAN report, it was also stated that the Chief of Army Staff, Lt-Gen Tukur Buratai, had approached the National Universities Commission in June 2017 to apply for the university’s approval. “Buratai…explained that the university was being designed as a unique and specialised institution that would serve as solutions centre, especially to specific challenges facing the military and North-East region.” Recall that the Nigerian Navy only recently established its own university – Admiralty University of Nigeria (ADUN), which is set to welcome its first intakes this year. Also, the Air Force got approval for its own university, Air Force Institute of Technology (AFIT) last year and is already running courses. Good idea, but it seems like a competition amongst the armed forces.

At the launch of ADUN earlier this year, the navy chief said that the university was “conceived to…meet the training needs of the Nigerian Navy along with those of their sister services with reduced travel abroad for training….” On its webpage, AFIT states that, “it is a tertiary institution with a blend of military and civilian staff and students… The Institute conducts undergraduate and postgraduate programmes in Aerospace Engineering and allied disciplines.”

Let us return to the proposed Nigerian Army University, Biu (NAUB). When I read the Twitter post about the postponement of its groundbreaking ceremony, my first question was: “Why Biu?” Why is the army proposing to build a university in Biu when virtually all our military and defence institutions are located in the North? Why not elsewhere? Just look at the roll call:

Is it fair that virtually all but one of our military training and educational institutions are concentrated in just one part of the country? When I tried to find out why Biu has to be the location of the proposed army university, I couldn’t get any plausible reason other than the fact that the current Chief of Army Staff, Lt-Gen. Tukur Buratai, comes from Biu LGA of Borno State.

In itself, it is not a crime for the CAS to want the army university in his hometown, but where is the sense of altruism considering the fact that there is no single military institution in the whole of the South-East and South-West regions? Could it not have made much sense if this new university was sited in either of these two regions?

At a time when virtually all of the heads of our security, military and para-military services are all from one section of the country and one religion, the siting of the army university in the North does not do well to promote national integration or accord with our Federal Character principle.

In their scholarly essay, ‘Federal Character and Management of the Federal Civil Service and the Military’ (1991) published in Publius: The Journal of Federalism, Ladipo Adamolekun, John Erero and Basil Oshionebo noted that “The makers of the 1979 Constitution who introduced the ‘federal character’ principle specifically linked it to the objective of achieving national unity. Some of them also believed that the principle would help to ‘secure and maintain stability in the country.’”

The Federal Character principle is not just about providing some degree of balancing, fair, and equitable representation of states and ethnic groups in the composition of civil service personnel, but also about the geographical spread of institutions of government. The aim, according to the Constitution, is “to promote a sense of belonging and loyalty among all the people of the Federation.”

On its webpage, the Federal Character Commission, the institution of government charged with the implementation of the federal character principle, states that its mandate is to ensure “fairness and equity in the distribution of public posts and socio-economic infrastructures among the various federating units of the Federal Republic of Nigeria.”

It is clear therefore that the concentration of all our nation’s military institutions in one section of the country and the appointment of all our nation’s security chiefs from one section of the country does not represent the spirit of federal character and does not serve to promote national cohesion. Imagine what difference it would have made if this new army university had been sited in a place like Asaba as a way of appeasing the Asaba people on the 50th anniversary of the Asaba massacre by the Nigerian army during the civil war (1967-70) or even to calm frayed nerves in the Biafra heartland.

Moreover, there is virtually nothing new that the army university is going to offer in terms of courses that other conventional universities are not already providing. At the approval of the university by the Federal Executive Council, the education minister said that the new institution “will be a hub for developing a Nigerian Military Industrial Complex.” If that is indeed what it is, how is it different from the mandate of DICON, even though DICON is not an academic institution? On DICON webpage, its director-general stated that the goal of the institution is the “establishment of a Military Industrial Complex to produce weapons and other equipment for the country’s Armed Forces and reduce reliance on reluctant foreign suppliers.”

My take is that many of these institutions are just endless proliferations with overlapping aims and mandates. Perhaps it would have made much sense and even cost-effective if any of the current armed forces training institutions had been expanded to meet the army’s infrastructure and technology needs.

If we must have an army university, it would make much sense to have a specialised university that will focus exclusively on training and developing skilled manpower to serve the army’s technology needs. But this doesn’t seem to be the case. The website of the proposed university (naub.edu.ng) states that the institution is designed “to serve as a solutions centre for the technological and other operational problems of the Nigerian Army, the military and the nation” as well as “create the critical mass required for research, innovation, testing and development of military equipment in a 21st century setting.”

Now, see the irony. Of its seven faculties (Science, Technology, Military Technology, Environmental Studies, Administration & Management, Social Sciences, Military Policy, Logistics & Strategy), only two deal with core military technological needs. The rest offer courses that any other conventional university is offering. So what is the difference? There is even a BSc course in Recreation and Leisure Studies in the army university. How does this help in developing a military technology in the 21st century? Only God knows where the lecturers for such a course will come from!

If we had a sensible educational policy, these universities should have been fully specialist schools for developing manpower to drive Nigeria’s agricultural and technological revolution. But that is not what they are; they are only universities of agriculture and technology on paper. That is why in 2018, Nigeria, which claims to be Africa’s largest economy, is not able to produce school pencils.

On a final note, while it may be late to reverse the decision to site the army university in Biu, it should be noted that this is one more step backward on the path to national integration.

The YOUTHSPEAK Column which is published on Wednesdays and Fridays is powered by RISE NETWORKS, Nigeria’s leading youths and education development Social Enterprise as a substantial advocacy platform open for all young Nigerians to engage leadership at all levels and share thoughts on burning issues of youth interest covering a wide range of topics such as Governance, Media, Politics, Health, Entertainment, Business, Fashion, Youth Empowerment, Education, Art, Pop Culture etc. The soft copy version of this column’s articles are also on risenetworks.org/youthspeak and tribuneonlineng.com. We would therefore welcome writers’ contributions by way of well crafted, thought provoking, analytical opinions that are factual and non-defamatory. All articles (which must not exceed 1,000 to 1,500 words) should include author’s name, phone number and email address and should be sent to rise@risenetworks.org.

Africapitalism in Nigeria and the discarding leadership excellence from national…