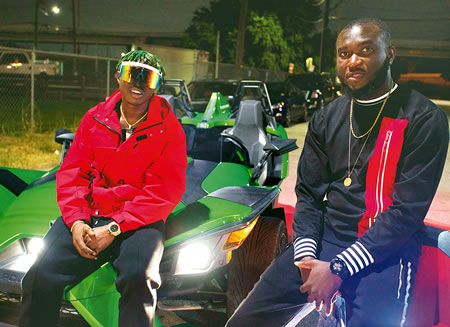 After a brief hiatus, Nigerian-American singer, Ilebor Promise, popularly known as KINGP, is back with another tune for his fans within  and outside the country.

This time, the US-based songwriter and singer has teamed up with afro-pop indigenous rapper, Zlatan, on the song entitled, Banga.

Having teamed up with Gongo Aso crooner, 9ice, on hit track, Agbero, three years back, KINGP said he reached out to Zlatan to show his fans that his music career remained alive.

The song, which was released on Friday, has become the gist of the town as fans of the two music stars have waited to have a feel of what Zlatan and KINGP have been working on for weeks.

Speaking on the song and his record label BRG, KINGP said the collaboration with Zlatan could not have come at a better time now that the music industry seems to be in tune with his style and vibe.

Signed to Bugatti Record Group (BRG), KINGP said the label, despite some hitches in the last few months, remained a strong music label that many young and established acts want to be part of.

“BRG has remained a very strong music group and has done well over the years with a number of collaborations and songs. We are still committed to turning out good songs like Banga and more. We are just starting,” he said.

Lagos agog for ‘Discover Your Talent in Da Hood’