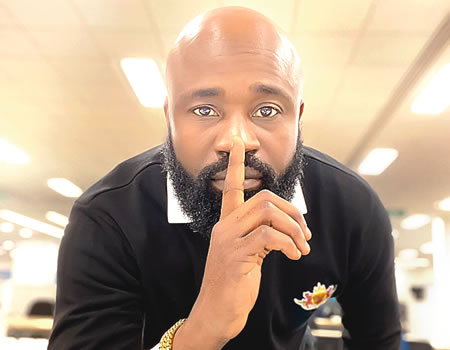 Afropop singer, Sean Dampte, who recently dropped a single entitled: ‘Adura’, which is increasingly gaining a lot of airplay in and outside the country, in this interview by FEMI OGUNTAYO, talks about his music career and why he recorded the track ‘Adura’. Excerpts:

What got you into music in the first place?

I have being in music for so long that I cannot particularly explain why I am into music other than it gives me joy and fulfillment to be part of the culture. I guess I can confidently say it must be the love for music itself.

The brand Sean Dampte is gathering great momentum in the music industry, especially in the UK and Nigeria. How do you feel about this?

I am humbled to say the least but in all honesty there is still much work to be done. I am grateful to my team, friends, family, Awoodahites and everyone that is part of this journey.

How did you manage to push the brand to this applauding level?

Like I said earlier, I am humbled to see how far we have come. The most important thing for me and for everyone for that matter is the resilience that you possess. I started by believing in myself and ability and over time, loads of people started to see that I would not be going anywhere and they began to take the brand Sean Dampte serious. It’s been a long journey, but we are thankful.

How would you describe your type of music?

I like to call what I do Afro-Calypso but ultimately it is part and parcel of the AfroPop vibe with loads of other cultures present.

How does your work comment on current happenings in the social and political circles?

Yes, it’s been and still a trying time overall and I cannot shy away from the happenings. With that said, that is one of my reasons for the single ‘Adura’, which is just to point out that only prayer can uplift us, and that we must always continue to pray.

Your manager is white, while you are black, how do you feel about this given the recent uproar about racism against the black race?

Personally, I understand where and how the current uproar affects the psyche; however it is never about white versus black but rather about us, from a black background, being treated equally and respected. I support the #BlackLivesMatter movement wholeheartedly and willingly believe in what we trying to achieve.

Where and when do you get inspired to write your lyrics?

It happens anywhere and when that happens, you can bet I am on to my team. We work to always get the best out to everyone. My key producers Joey Benks, JayOcean and Jomane have been fantastic. Sometimes 1am, 2am, we are still up working across continents. (Laughs)

It is a belief that nowadays artistes don’t undergo much stress to be known, unlike when there was no internet or social media, when musicians had to go from one town to another to perform. But now it seems easy as many music talents have been known via the social media, what is your say on this?

It is really difficult to comment on that, but one cannot undervalue the effect of social media and technology as a whole. The truth is that the challenge is still there and more importantly it has opened up the opportunities for more talents to be able to showcase themselves and direct their musical career.

I have performed at a host of events to say the least – But in the last two years I have been on stage with Wizkid at the YCee concert, Falz the Bahd Guy, Davido, all in the United Kingdom and Kizz Daniel in Amsterdam to mention a few.

Which is your favourite song when you perform your songs?

In truth I enjoy performing to all of my songs at every opportunity I get. Considering I enjoy listening to good music. However, if it were to happen that I was put on the spot and had to perform one, I would most probably choose Marcelina – it’s a very different vibe.

Which famous musician do you admire?

There are loads of great artistes and musicians out there to say the least and that follows that I probably would admire a lot of them.

If you could change anything about the industry, what would it be?

That in itself would be a monumental task for one person to take upon him or herself. (laughs), I would only want more to be done to protect the artistes and their investors really. No one likes their work to be infringed upon and no one likes to be cheated. So yes, protect all stakeholders’ rights as much as possible.

You once said in an interview that you almost killed yourself due to depression. How did you get over it?

It was a dark place to be in. And it’s not somewhere I like to visit. But one generally needs to keep on focusing on the good things and love for family. It is important to keep in contact with close family and friends and speak out. That works for me and hopeful it helps others who struggle with it too.

What is one message you would give to your fans?

I mean all my Awoodahites know how we do now! We plenty like stars! Life Money Happiness crew. We keep on keeping on. I love my Awoodahites and they love me too!

What’s next for you?

Yea it’s been an interesting year to say the least and following all the great reviews we have had for my hit single ‘Adura’ – I think it’s time I let people into my world and so I will be dropping my Sophomore EP on August 21 entitled: ‘Awoodah Rising: Man Like Sean Dampte’. Make sure you look out for it.