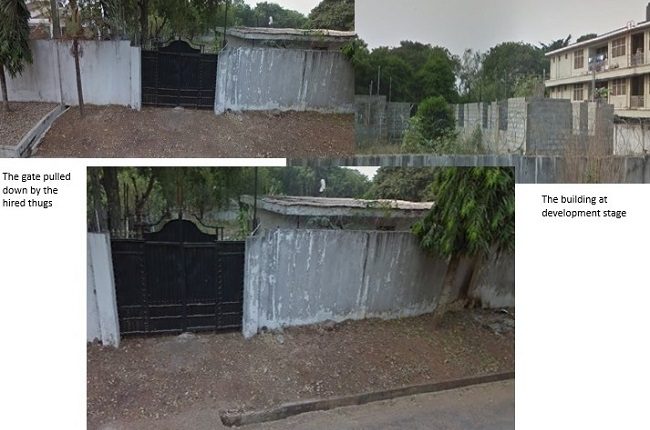 Staff of the Nigerian High Commission in Accra have produced documents to prove that the government of Nigeria owns the land where security operatives partly demolished a building last Friday.

Speaking to hosts of the Asaase (a Ghanaian radio station’s) breakfast show on Tuesday, June 23, Ghana’s Minister of Foreign Affairs and Regional Integration, Shirley Ayorkor Botchwey, said that Nigerian officials got the first hint of an impending dispute last week.

They made appeals for assistance to Ghana’s National Security and the Ministries of the Interior and Foreign Affairs on June 15, she confirmed.

The demolition late on Friday night targeted new structures on a walled piece of land adjoining the Nigerian High Commissioner’s residence on Barnes Road. The plot is three blocks up the road from the Canadian High Commission, within Accra’s old diplomatic enclave.

Nii Okwei Kinka Dowuona VI, head of the Osu Traditional Council, one of the units within the Ga Traditional Council area, disputes ownership of the land. On June 21, he issued a statement saying: “The said parcel of land belongs to the Osu stool and is to be used for purposes only agreed upon by the stool and its council of elders.

“The stool is also informed that the structure is [a] planned entertainment complex to be used as an events centre for commercial purposes and is not a block of flats as has been purported.”

The statement further alleged that the unnamed “trespasser” on the premises was a private businessman acting under the cover of a Nigerian diplomat. “The intention of the trespasser is to forcibly take over land under the cover of diplomatic mission from the stool land without redress and without the permission of the traditional authority and its council of elders,” it said.

Ms Botchwey told the Asaase Breakfast Show that the Government of Ghana is making every effort to make restitution for what may have been a breach of the Vienna Convention, which governs diplomatic relations between nation states.

The Ministry of Foreign Affairs issued a press release on 20 June saying: “Whilst expressing regrets over the incident, the Ministry wishes to reassure the Diplomatic community in Ghana, and the Nigeria High Commission in particular, that Ghana remains a law-abiding country that upholds the principle of the rule of law, where due process is followed at all times.

“The Government will, therefore, not relent in its primary obligation to guarantee the safety of Members of the Diplomatic Corps in Ghana.”

Patrick Korlayebisi, a contractor who was working on the razed structure, says the High Commission did not receive any warning or notice of any legal problems before the demolition took place.

Staff from the Lands Commission had visited while construction was ongoing at the site, he told Joy News. The Lands Commission representatives expressed no reservations when they learned that the building on the site belonged to the Nigerian High Commission.

“It was, therefore, unfortunate that armed men later stormed the premises to pull down some buildings,” Korlayebisi said.

Ms Botchwey told presenters of the Asaase Breakfast Show that moderation on the part of all parties to the dispute will be the surest way to resolve the matter. (Asaase Radio)