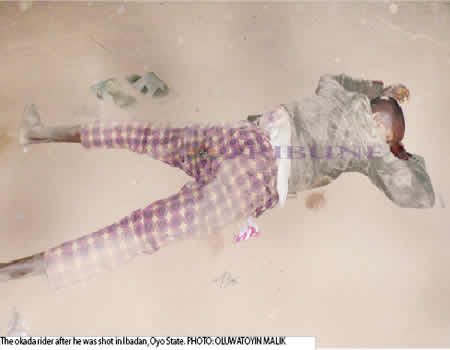 A commercial motorcyclist, on Friday, dies in a lone accident opposite Ihiala Local Government Area Secretariat, along Ihiala-Owerri expressway in Anambra state.

The accident which occurred around 1.10 pm involved a black coloured Carter Motorcycle with registration number 827NNE.

Tribune Online learnt that the deceased whose identity was yet to be determined, reportedly lost control of the bike, due to lack of concentration, crashed into a ditch and died instantly.

“The cyclist, a middle-aged man, whose identity is yet to be determined, lost control of the bike, due to lack of concentration, resulting in the unfortunate crash which claimed his life.

“The corpse of the deceased, who was the only victim in the crash has been deposited at Our Lady of Lourdes Hospital Mortuary, Ihiala by the FRSC rescue team from Ihiala Unit Command. The team also handed over the motorcycle to the Police, for further investigation.

“The Sector Commander Federal Road Safety Corps Anambra State, CC Andrew A. Kumapayi strongly warns motorcycle riders against plying the expressways, as it is a violation of road traffic rules and regulations.

“He also reiterates the importance of wearing a crash helmet when riding on a bike, to prevent head injuries during a crash. He sends his condolences to the family of the dead.”

One dies, others injured in Anambra road accident