A High Court of Justice sitting in Jos, Plateau State, has granted an Order compelling the Acting National Chairman of APC, Chief Victor Giadom, to proceed with the NEC meeting fixed for Thursday, June 25th, 2020.

The Order was made upon the Application of the Chairman of Plataeu APC, Mr Latep Dabang, who is also a member of NEC. 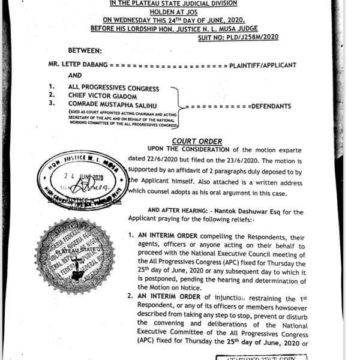 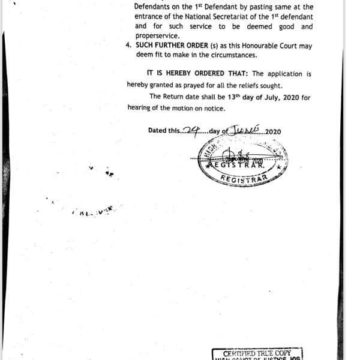 He complained that the provision of the APC Constitution regarding the convening of a quarterly NEC meeting has been serially abused and ignored by the present NWC, leading to a litany of illegalities by the NWC.

It would be recalled that President Muhammadu Buhari gave his nod to the convening of an emergency NEC meeting to save the party from the multiple crises bedevilling it.

Already letters have been sent out to all the Governors and members of the National Assembly who are NEC members.

Whilst the Governors and lawmakers would be seated at the Council Chambers with Mr President, others would join by virtual means.

Already, the visitors’ list at the Presidential Villa contains the names of NEC members expected to arrive tomorrow, confirming the clear endorsement of the meeting by President Muhammadu Buhari.

“With this order, all is now set for a full reconciliatory meeting of the APC tomorrow led by the President himself.

“The President has received very convincing advice on the position of the law as far as the situation in the party is concerned and has determined that the law is on the side of Victor Giadom as Acting National Chairman.

“Because he will always act in accordance with the law, the President will be attending the virtual meeting Giadom called for tomorrow afternoon.

“We urge the media to stop promoting manufactured controversies and to not give any further room for mischievous interpretations of the law on this matter.

“In addition to the President, the Giadom meeting will, hopefully, be attended by our Governors and the leaders of the National Assembly.” (timenewsng)