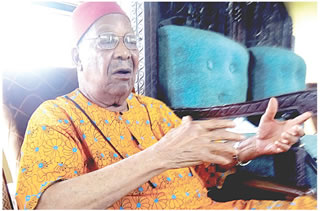 Chief Mbazulike Amaechi is the only surviving member of the cabinet in the First Republic. Upon his election in the 1959 federal election as a member of the House of Representatives under the banner of the defunct National Convention of Nigerian Citizens (NCNC), he was appointed Minister of Aviation and Transport in 1962, a position he held until the first military coup in 1966. The 91-year-old elder statesman speaks to the Group Politics Editor, KUNLE ODEREMI, on the state of the nation and what can be done to rescue the country from the precipice.

As an elder statesman, what would you advise President Muhammadu Buhari to do, given the critical state of the nation now? How would you assess the situation?

All I can say is that the country is at a precarious situation now.

Well, there is a total collapse of security architecture in the country. And we have a Presidency of a section of the North that is preaching the new gospel of Fulani ownership of Nigeria or something like that which is driving suspicion into many people. And, of course, the treatment meted out to the South-East people does not give one comfort. Couple with that, you see all the killings going on in the North and what is going on in the South-East and even in some parts of Yorubaland too, especially in Oyo and Ogun states. There is a total collapse of security. The government is collapsing too and I don’t see anything serious they are doing about it.

There is the urgent need for leaders of this country to meet and re-examine the whole basis of the federation we have. I am not saying it is the politicians who should meet. But the real people of Nigeria should meet and discuss. The situation is getting out of hand.

What are the core issues that should be discussed at such a meeting?

The basis of the federation is the real thing that should be discussed. Of course, the constitution which the Northern People’s Congress (NPC) led by Ahmadu Bello, NCNC led by Nnamdi Azikiwe and Action Group led by Obafemi Awolowo gave the country in 1960 was thrown away by the military and the military has imposed a constitution that is not people’s constitution twice. The 1979 Constitution was not a people’s constitution and the current 1999 Constitution is not a constitution for the people of the country. So, what we have now is no longer a federation. A federation is supposed to be a union of so many states with different culture, religion and background coming together and agreeing to live together like the Soviet Union, the United States of America. This is what is called a federation and not what currently obtains in the country. It is no longer a federation when somebody sits in Abuja and creates a local government at Okene or Nnewi. That is what is happening. So, the leaders now have to meet and discuss the whole basis of a new federation, a new union in which no part should dominate the others and in which no part should be excluded and treated as a sub-part. We need a new federation of equal partners like in the United Nations. India, America and China have great human population but they have just one vote in the United Nations as do Equatorial Guinea, Togo and other countries.

Do you have any fears of where the current system is it likely to lead us should we want to sustain it?

I am not a prophet. But I can say the current situation offers no hope. All I see is crisis and revolution. It might get to a stage where we cannot continue any longer. See one man wielding absolute powers now. If the military surrounding him said we can’t continue like this, God knows where that will lead the country.

You spoke about the South-East not getting fair treatment. What exactly do you mean?

The South-East wants to produce the next president and it is also calling autonomy. How would you reconcile the two?

There is crisis. A group of people are not being treated as part of the whole. I can tell you that despite this, the whole South-East believes in one Nigeria. I believe in one strong country. I fought for one strong nation. I am a co-founder of one big nation. That is where the Igbo stand. You go round the country, any town you get to whether Ibadan, where the Tribune is located, take away the Yoruba population, the next highest number of ethnic group is Igbo people. So it is in Kano, Kaduna and so on. Come to Onitsha, Enugu, you don’t find Hausa or Yoruba people building houses there. But the Igbo people build factories in other parts of the country. So, how do you think the Igbo would want to go away from Nigeria? We believe in this country. But we don’t believe we should be living as slaves in the country. So, the young men who are agitating for freedom have the right to so do. If you give the South-East what it wants, these young men have fathers who will tell them to stop because things have been fairly re-arranged.

You have suggested we should have a conference where all ethnic nationalities will come together to discuss the way forward for the country. But the Federal Government has just said it is not favourably disposed to a national conference. In fact, the government asked whoever has grievances to channel same to the National Assembly which is already looking into reworking the constitution.

In other words, we need a conference to address all these issues of kidnapping, banditry and insurgency.

Go and do investigative journalism to find out what is causing the violence and killings in the North. It is not the same thing as what is happening in the South.

In the meantime, how do you think we can address the issue of insecurity that is spreading across the land like wildfire?

When a situation is like this, fathers and elders of the country come together to find solution.

You were a leading light, in fact a minister in the First Republic. How do you see the present crop of politicians? Are they doing the needful so that the country can get over some of these challenges?

They are doing the best that they the can in the circumstance they have found themselves. Many of them are surrogates of the corrupt military. So, the whole system is corrupt and rotten.

So, we need to re-jig the system?

The whole system needs a total overhaul and needs God and human interventions. God has to intervene through humans. He will not come directly to intervene.

What does the National Question mean to you? Is it self-determination?

Ask the people who said so.

What is the way forward?

We need to re-examine the basis of the whole system. It is on a wrong premise. And once the foundation is bad, the building on it cannot stand.

World Press Freedom Day: When information is no longer for public good