World Press Freedom Day: When information is no longer for public good 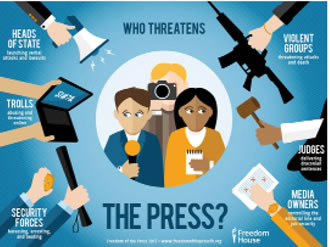 The press as an integral part of the society steers the ship of information that either promotes or hinders the development of the society. ADEOLA OTEMADE, in this report, x-rays the challenges facing the press, especially in the area of its freedom.

When the public’s right to know is threatened, and when the rights of free speech and free press are at risk, all of the other liberties we hold dear are endangered.” – Christopher Dodd

All across the globe, May 3rd of every year has been set aside to celebrate and appreciate the roles of the press. The press has been the intermediary between the government and the masses. Having been invested with autonomy, the press as an independent body had a voice of its own, and known for speaking truth to power.

However, over the years, the press has come under oppressive rules and stifling government policies that threaten this freedom. That is why the theme for this year’s World Press Freedom Day holding tomorrow, ‘information as a public good’ serves as a call and a reminder to affirm the importance of cherishing information as a public good, and the need to reclaim the freedom to achieve this.

Ironically while struggling for freedom to provide information as a public good, the press is also facing stiff and intense competition with the New media which is largely unregulated and has a much wider audience.

Subsequently, according to veterans of the journalism profession who spoke to Sunday Tribune, the traditional media may not be in existence in some years to come as a faceless community of social media users and operators is fast spreading its tentacles, having almost taken over the face of journalism as bloggers, social media influencers, digital marketers, content creators, among others.

All of these and more, including a devastating global pandemic, have birthed the drastic downturn in the once blooming traditional media business, resulting in economic challenge, misinformation, corrupt practices amongst journalists, mass sack, detention of journalists and gagging of the press which had threatened the provision of information as a public good.

According to Gloria Bellason, a Resource Lecturer at the Nigerian Defence Academy, Kaduna, Kaduna State, in an interview with Sunday Tribune, there is a steep decline in the quality of media reports, as reports are no longer reported with facts and logical conclusion.

“Generally there is a steep decline in the quality of media reports. Critical stories and events that are capable of making or [breaking] the Nigerian State are not reported with the factual accuracy that is required and if and when they are reported, in whole or in part, the reports are not followed up to their logical conclusion.

“Take security for example. No media house has invested in the investigation of who the sponsors of Boko Haram are; who the bandits/terrorists are; why ‘Fulani Extremists’ are listed as terrorists in the Global Terrorism Index (GTI); nor are there reports on the trends, shifting landscape and impact of terrorism and insecurity in Nigeria and to Nigerians.

“Again if you take the judiciary as a last resort, you will find that many media houses cover judiciary beats, but are yet to put out beat articles or investigations that report on mode of appointment and succession of judges, corruption in the judiciary, the raid by night on judges and justices by DSS, Nigeria’s secret service; the removal of Chief Justice Walter Onnoghen by ex-parte; the Code of Conduct Tribunal Chairman; Danladi Umar’s alleged assault on a guard and the nexus or implications of these events to justice delivery either as unit occurrence or as collective incidents.

“And because the Nigerian Press is failing to do their job, we have no national agenda. We, also, are not interested in leaving any legacy for those who come behind to learn and build from. If it seems that we are becoming a nation of happenstances, it is largely because the Nigerian media has failed as watchdog to set up a national agenda and checkmate the system,” she explained.

Investigative and Data journalist, Lukman Abolade, is of the opinion that the media needs to do more in disseminating true and verified content, as there are lots of unverified, unreliable source through which information are being disseminated.

“Generally, I think the media should do more in disseminating true, fact-checked, objective and educative content rather than subjective information that suits their publishers, or sponsored contents to suit insincere agenda,” he stated.

Economic Freedom of the Press

A senior editor in one of the national newspapers, while speaking with Sunday Tribune on condition of anonymity revealed the struggles many journalists face. According to him, the advent of digital media had relegated the importance of the mass media to the background, as they now have to struggle with keeping up visibility via their online platforms and apps.

“The emergence of the digital media, created room for journalism to expand via online platforms, as information became easy to access whether the source is verified, reliable or not.

“The era of COVID-19 pandemic really affected the traditional media; mass retrenchment occurred as many organisations could not keep up with paying their workers. Salaries were delayed and adverts were not coming in as the whole country was on lockdown. It was really a tough time for us, but amidst all these, the digital media still thrived, though every facet of the country was affected, but technology in a way still provided a means of livelihood for some categories of people,” he posited.

Speaking on media economy, Bellason maintained that the heart of journalism is ethics, as ethics does not rob an organization of profits; rather the absence of ideology and innovation had affected the media economy in Nigeria.

“I think that there is an absence of both ideology and innovation which affect the media economy in Nigeria. To be clear, every media house must decide whether their primary existence is legacy or benefits. Those who choose legacy often end up with legacy, benefits and profits in the long run. Those who make benefits and profits as their main stay are not media practitioners, but news swindlers and peddlers who stake news for the highest bidder. If the media space seems to suffer economic hardship, it is rarely from political pressure than it is from the inability to diversify and invest properly,” she added.

Today, as the social media continues to wax stronger, the race is about who is publishing first and how much traffic is coming to a particular site. More worrisome is the veracity of the information being published, which puts in jeopardy the idea of information as public good.

A journalist who pleaded anonymity while speaking with Sunday Tribune said: “Misinformation is trending; more frenzy, unverified, unsubstantiated information are out there, which in a way is not healthy for the consumption of the masses. The race is now all about who publishes first, the traditional media is also caught up in the frenzy as it is struggling to remain relevant in the media world.”

Felix Oladeji, a blogger, believes the fate of the mass media is currently hanging on by a thread as the social media is now the new face for passing information where it can be easily assessed. However, this move, according to him could be counter-productive.

“We are in the age where there is move from direct contact to distributed media. The move towards a more digital, more mobile, and more social media environment automatically warrants the promotion of misinformation.

“The (digital) news media have encouraged engagement by offering opportunities to comment on stories; that social media offer many options for posting, sharing, and discussing content has automatically led to the (social media) influencers promoting misinformation,” Oladeji added

In Nigeria, as in most developing countries journalists face harassment, including threat to and deprivation of their freedom.

Section 39 of the constitution of the Federal Republic of Nigeria, (amended 2011), says the right to freedom of expression and the press is guaranteed as a sacred right that cannot be tampered with without lawful justification. Also as an independent country, Nigeria under the Article 19 of the Universal Declaration of Human Rights, 1984, and Article 9 of the African Charter on Human and Peoples’ Rights, 1986 has an international obligation to guarantee, protect and respect the right to free speech and free press.

“Journalists, bloggers, and activists in Nigeria are increasingly harassed, intimidated, sometimes physically assaulted and arbitrarily arrested by Nigerian authorities simply for doing their job or expressing dissenting opinions,” he noted, adding that the human rights cost of receiving and sharing information for them come with dangerous consequences, thus making them to operate in a climate of fear.

“Journalists, bloggers, and activists are facing increased risks simply for publishing articles and demanding accountability from the authorities. This is totally unacceptable. The authorities must immediately put an end to this hostility towards human rights,” he said.

Bellason, speaking on media regulation in the country, believes “it is time to ask the question: who regulates the Nigerian Broadcasting Commission that regulates media houses, and also for credible media houses to fundamentally report facts and incidents accurately.”

Speaking further, she said: “It is really unfortunate that Channels TV was suspended and imposed with a fine of N5million (five million naira) by the National Broadcasting Commission just for interviewing a member of Indigenous People of Biafra (IPOB). Many commentators have opined that the real reason for that inordinate sanction is Channels report on the Pantami’s case.

“It is also very important to ask what violation of ethics is and whether it is a strict liability offence that makes NBC a reporter, a judge and jury of their own case.”

With all these myriad of problems facing the press in Nigeria and other countries of the world, information as a public good is obviously under threat. The question is: when will the threat cease to exist? The answer as they say is blowing in the air.

How FCTA, others battle COVID-19 pandemic in Abuja

The legendary Awujale Adetona at 87