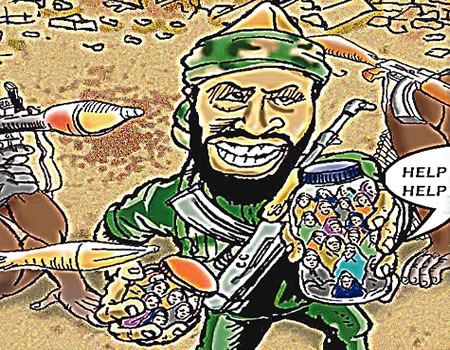 The action of our lawmakers can best be described as ridiculous. What a terrible and insensitive national assembly. Our national assembly is sponsoring a bill to rehabilitate allegedly repentant Boko Haram members even as the sect threatened to burn down their chambers.

The assembly members care about their lives and safety but not the lives and safety of the people that voted them into office though many of them rigged their ways to get there. They did not deem it fit to sponsor bills that will bring an end to the incessant and dastardly killing of innocent Nigerians or the hundreds that are brutally massacred by these devils in such a way that we have never seen.

I know that the executive controls the other two arms of government. The executive is saying that no matter what havoc Boko Haram and Fulani herdsmen wrecks on their victims, the security agencies should not arrest them nor should their victims retaliate even if they catch any of them because vengeance belongs to God.

This is why these atrocities will last as long as this government lasts. Any need to say that these evil doers enjoy the support of the Federal Government? It is in order to conclude and give support to the order of the presidency that this stooge or member of Boko Haram in the house is sponsoring the bill.

Finally I wonder whether the sponsor and seconder of the bill as well as supporters of the bill in the supposed hallowed chamber consider that this might happen to their families or people they know before the bill is passed. These will enable them to know how to package their benefits. Talking about rehabilitation of Boko Haram members and leaving out survivors and families of dead victims is the most heinous crime the national assembly could commit against the masses of this nation. It is a crime against humanity and a disservice to those that voted for them. It is also a sin against God.

On security in Oyo State

Relevance of separation of powers and independence of the judiciary