We need more members for community projects, rotary cries out 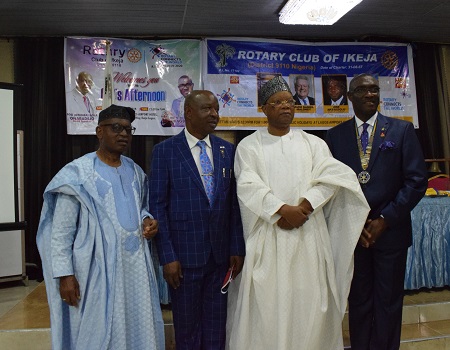 As harsh economy condition bits harder in the country, Rotary Club of Ikeja (district 9100), Lagos, has called on corporate bodies, captains of industry and wealthy individuals to join the organisation and support its activities in order to cater for more less privileged individuals and under-served institutions and communities in its areas of operations, and Lagos State by extension.

The humanitarian organisation said there is much work on the pipeline to do to enable it reach many needy and vulnerable, as well as under-served institutions and communities in its catchment areas but hampered by inadequate funds.

The president of the club, Mr Olumuyiwa Fagbola, said this at a function, tagged: “CEO’s Afternoon” organised by the club, at Lagos Airport Hotel, Ikeja.

The forum with former minister of health, Prince Julius Adelusi-Adeluyi and the group managing director of Vitafoam Nigeria Plc, Mr Taiwo Adeniyi, among others, in attendance, was designed to woo more members and supporters for the club.

According to Fagbola, rotary under my purview has six areas of focus for intervention and these include education and literacy, maternal and childcare, water and sanitation, economic and community development, disease prevention and treatment, as well as peace and conflict resolution.

“We want to refurbish some dilapidated classrooms and provide benches and other necessary learning aids that will make learning and teaching more effective in some public schools including Ikeja Junior High School.

“We will also provide water and modern toilets to some schools and communities, and equally empower some youths and market men and women with some start-up funds to enable them to do better in their trades and vocations. We will intervene in maternal and childcare programmes in some government hospitals and so forth,” he explained.

He said the club strongly believes that these proposing projects would not only transform lives of direct beneficiaries significantly but also the society at large.

“But we need huge money to do all these and that is the essence of organising this CEO’s Afternoon to woo more captains of industry and other kind-hearted persons within our area of operations to join us so that together we impact our society the more.”

Speaking earlier, the guest speaker and former district governor of the club comprising Lagos and Ogun states, Otunba Bola Onabadejo, said of a truth, the bad economic weather in the country is negatively affecting many members from meeting their financial obligations to the club

He, however, urged philanthropist individuals and corporate bodies to support the course of rotary for a better society.