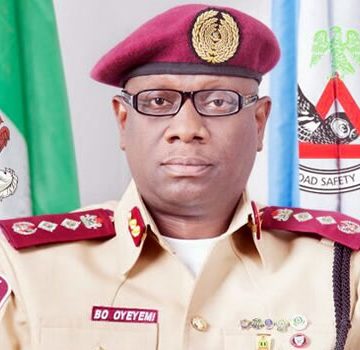 The Corp Marshal of the Federal Road Safety Corp (FRSC), Dr Boboye Oyeyemi, has called for value reorientation and reformation in all areas of endeavour, including political, socio-economic, morals and ethical values to address the multiple challenges bedevilling the Nigerian society.

Oyeyemi, who stated this during the 8th Convocation Lecture of Joseph Ayo Babalola University,(JABU) Ikeji Arakeji, Osun state, noted that the nation is continually becoming unsafe for both legitimate economic activities as well as social emancipation because of loss in social values.

Delivering the lecture titled “Optimal Functionality of Agents of Socialisation: Decisive Ingredient for a Better Tomorrow”,  Oyeyemi revealed that government as an agent has considerable influence in the conscious harmonisation and propagation of long-cherished values

According to him,  all the institutions and mechanism for safeguarding lives and properties in the country have been  increasingly outstretched and said ” the economic and socio-political implications have become quite severe such that human values generally have dwindled, loyalty to the nation, fear of God and hope for a better tomorrow are daily becoming of critical concern to all discerning.

“The situation has culminated into such a national disgrace and embarrassment, arising from the emigration of the citizen to other countries where they have been effectively enslaved – such as Libya. This is certainly killing the giant of Africa.”

The road Safety Marshall attributed the loss of some core values to the ineffectiveness of the agents of socialisation which included, family, peer group, school, religious organisations, government and the mass media, saying they are important to every child development.

Oyeyemi, however, proffered that parents and schools have a great role to play in shaping the lives of their children and students, in building a better and virile society, saying it is easier to build strong children than to repair broken men.

“The school must dutifully continue to place it’s socializing roles in the child development, especially as it quickly joins forces with the home at the formative period.”

He also said the government has major roles to play through conscious harmonisation and propagation of long cherished values and called on the government to invest more in education.

“This remains the only avenue the country’s low productivity level can be eventually be enhanced. Countries that prioritize education reduce industrial tension and enhance national productivity.

“Government at various levels must ensure that basic facilities and infrastructure are provided, competent teachers employed and well remunerated to impart desired knowledge.

Researchers should also be accorded deserved priority and results harnessed appropriately. Unhealthy industrial relations must be shunned by the teachers and they should take their work more seriously”

The institution’s Pro-Chancellor, Professor Anthony Imevbore, also described education as an important facet of socialisation, saying the school is an artificial institution set up for the purpose of socialisation and cultural transmission.

He said “Joseph Ayo Babalola University is keen to initiate, steer and participate in discussions and reshape the history of this country and continent where we can alter the social imbalance of the society”

The Vice-Chancellor of the University, Professor Sola Fajana called on the federal government to focus attention in the development of education in the country, saying it remains the core agent of socialisation for the all-around build-up of a university graduate in Nigeria.