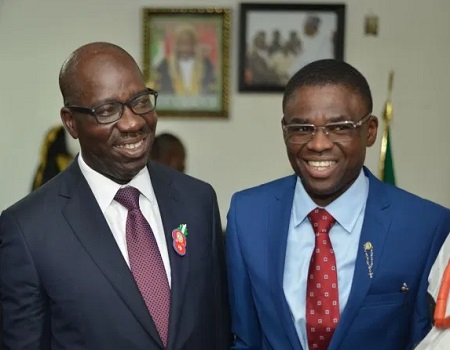 The crisis rocking the Edo State chapter of the All Progressives Congress (APC) took a dramatic twist on Wednesday in Abuja as a faction of the party announced the suspension of the governor, Godwin Nogheghase Obaseki, his deputy, Honourable Phillip Shaibu and Secretary to Government, Osarodion Ogie.

The leadership of the party loyal to Governor Obaseki and led by Anselm Ojezua had earlier on Tuesday removed the party secretary, Mr Lawrence Okah They also axed the national chairman of the party, Comrade Adams Oshiomhole.

But a faction led by Colonel David Imuse and Lawrence Okah, chairman and secretary, respectively claimed it was the authentic leadership of the party in Edo State and announced the removal of Anselm Ojezua as chairman.

They passed a vote of confidence in the national chairman and dismissed his suspension alongside the removal of Mr. Okah as state secretary as a nullity.

“The purported suspension of Mr. Lawrence Okah and his subsequent removal from office is a nullity and we hereby pass a vote of implicit confidence on him and so he remains the state secretary of All Progressives Congress (APC), Edo State Chapter.

“We note with grave concern a resolution by an unknown organ of APC in Edo State claiming to have passed a vote of no confidence on the National Chairman Comrade Adams Aliyu Oshiomhole and suspending him from the party. This development would have been laughable if it did not have serious implications for the overall integrity of our party.

“Their decision is unconstitutional and it is unheard of, for a lower-level party hierarchy official to want to take disciplinary action against an official or organ on a higher level. We, therefore, pass a vote of implicit confidence on the National Chairman Comrade Adams Aliyu Oshiomhole and the National Working Committee of the All Progressives Congress (APC).

“We wish to reiterate our position that Edo All Progressives Congress (APC) was plunged in this crisis by the unguarded actions and inflammatory statements by Anselm Ojezua.”

The faction further accused Governor Obaseki, his deputy, Phillip Shuaibu of instigating crisis which they claimed has polarised the party and threatened its cohesiveness.

The Colonel Imuse faction, therefore, announced the suspension of the trio of Governor Godwin Nogheghase Obaseki, his deputy, Honourable Phillip Shaibu and Secretary to Government, Osarodion Ogie from the party. They called on the Inspector General of Police (IGP), Mohammed Adamu to ensure the maintenance of law and order in the state.

“Thuggery and political violence has spiked and escalated in the pursuit of the second term ambition of Governor Godwin Obaseki and his deputy Mr. Philip Shuaibu.

“This is exemplified by the various incidence of the attack on the Benin residence of the National Chairman, the congregation of thugs on motorbikes that were led by Hon. Philip Shuaibu (Deputy Governor) to the convocation of Edo University, Iyamho, the mayhem that was visited on the political meeting in Owan East LGA.

“The same pattern repeated at lkpoba Okha LGA in Hon. Osarobo’s residence. On 18th June 2019, where members of our party who were elected into the Edo State House of Assembly were violently attacked by armed thugs led by the Chief Security officer of the governor, Mr Nwokolo.

“There is clear and unambiguous evidence by the admission of the governor himself that he actively supported and worked with opposition candidate in areas where his favoured aspirants did not pick the party ticket. This pattern of anti-party activities led to widespread electoral loses in Edo South Senatorial District including the Ward and Local Government of the governor where we lost.

“In the desperate bid of Mr. Obaseki to suppress all forms perceived opposition and in his determination that no credible opposition emerges in the forthcoming primaries, elected council officials are indiscriminately removed from office with impunity.

“In light of the foregoing, it has become obvious that Mr. Obaseki has become a liability to the All Progressives Congress (APC). We cannot longer fold our arms and watch him drag our collective political fortunes into the abyss in his desperate bid to destroy the party. The only option is to protect the interest of all stakeholders who have laboured assiduously to build up the party.

“Consequently, we hereby pass a vote of no confidence on Mr. Godwin Nogheghase Obasek‘t and his leadership team comprising Hon. Phillip Shaibu (Dep. Governor) and Osarodion Ogie (Secretary to Government) and they are hereby suspended from the party.

“Finally, we wish to use this medium to put the Inspector General of Police and other security agencies on notice that members of the State Working Committee of the All Progressives Congress (APC) Edo State were harassed and hounded out of Benin City following the vote of no confidence passed on Anselm Ojezua. Thugs and hoodlums were mobilised to our houses in the dead of the night, and some others were stationed at strategic locations including the Benin Airport.

“We urge the Inspector General of Police to take necessary steps to protect our lives and property that are now at risk following the threats that followed our patriotic action to savage the image an future of our party.”