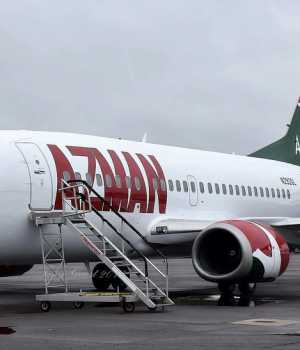 A new twist has just emerged following the suspension order slammed on Azman airline by the Nigerian Civil Aviation Authority (NCAA) as the airline management has accused the NCAA DG, Captain Must Nuhu, of vendetta.

In a statement issued by the airline, the management traces the vendetta mission embarked upon by the NCAA DG to years back when he tried to force the airline to pay the sum of N15 million for an advert carried on the airline while he was on the council of International Civil Aviation Organisation in Montreal, Canada.

According to the airline management: “Early this morning, we received a letter referenced number NCAA/DG/AIR/11/16/300 dated 15 March 2021 signed by DG NCAA Captain Musa Nuhu informing us about the suspension of our flight operations without any justifiable course. However, as stakeholders, it is equally important to inform you about the circumstances that led to this unfortunate situation.

“Prior to the appointment of Musa Nuhu, DG of NCAA, while he was serving as Nigerian ICAO representative in Canada, a few years back. He came to Azman Air Head Office in Kano with copies of ICAO Magazines, which featured Azman Air advert and demanded the sum of 15 million Naira for the publications, which the Managing Director of Azman Air Faisal Abdulmunaf outrightly rejected.

“On his appointment and assumption of duty as DG NCAA, he started his vendetta against Azman Air. Such as, raising serious allegations against the airline in meetings, to which we always objected to on spot. Most of the time it doesn’t go down well with him.

“As part of his vendetta, he sat on our request to bring in expatriate for more than a year, it took the intervention of Honourable Minister of Aviation to have him release the documents, which he eventually obliged with a refusal recommendation. After meeting him personally, he said he has friends and relatives that he want us to employ. But after detailing the nature of what is at stake to the Minister in terms of safety, he was overruled.

“Finally, as it is clearly manifested in the DG NCAA letter of suspension, there is no reason given by Musa Nuhu for the decision he has taken apart from his vendetta. It is unfortunate for an indigenous private company that employed thousands of Nigerian families, complying with rules and regulations of the NCAA for more than 7 years to be targeted by a single individual for an issue that is not in the interest of Nigeria. It is clear that those families do not mean anything to him.

“Azman Air has not been sanctioned nor has any bad records with the authority before the coming of this DG since 2014. There was no invitation for hearing, notification, query or any explanation for the reason of our suspension. Due process has not been followed.

Therefore, we are urging the general public and our teeming esteemed passengers to bear with us, while we are taking all necessary steps towards resolving this matter with appropriate authorities.”

Nigeria may be close to flattening the curve of the COVID-19 pandemic as confirmed cases in the country keep dropping weekly, Tribune Online analysis has shown. This is even as the much-expected COVID-19 vaccines arrived in Abuja, the Federal Capital Territory last Tuesday…Twist in suspension of Azman operations