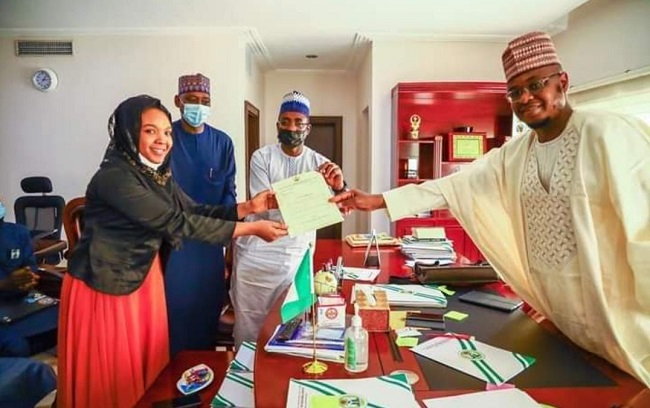 The Minister directed the Agency to mentor her, monitor her progress and support the system under the stipulated regulation.

The Director-General of the National Information Technology Development Agency (NITDA) Mallam Kashifu Abdullahi, however, assured that victims of sexual abuse in Nigeria through ICT will have the opportunity of presenting their cases without fear of stigmatization.

He gave this assurance while receiving the CEO of Shamrock Innovation Hub, women and youth-centric tech innovation hub that developed HELPIO, an android based application used in reporting sexual abuse.

Abdullahi commended Shamrock Innovation Hub for the exciting and laudable development in creating sensitization and awareness to sexually abused victims with the aim of supporting them and eliminating any form of stigmatization while at the same time, bring perpetrators of the heinous crime to justice. He assured the hub of the Agency’s support, mentorship and monitoring of their progress in line with stipulated regulations.

He advised the hub to evaluate their internal infrastructure size so that the Agency can examine possible areas of assistance, connecting the hub with a vast service provider for seamless integration and promised to provide solar panels to ease their operations.

With regards to awareness in rural areas, Abdullahi said that the Hub’s sexual abuse reporting application will be given adequate publicity on the Agency’s social media handles and the NITDA Impact weekly television programme, adding that the Agency will come up a with start-up innovation challenge to get the development of the application on iOS devices.

During the Hub’s presentation, Abdullahi considered that a large amount of personal information will be collected in the investigation of sexual abuse cases and therefore advised that it was necessary for the Hub to align with the standards of the Nigerian Data Protection Regulations. He said that the Agency will link the Hub with a Data Protection Compliance Organization to ensure compliance with the regulations.

Miss Sa’adat Aliyu, the founder of Shamrock Innovation Hub who had earlier sought support from the Agency expressed delight and appreciation at the Agency’s assurances of support and cooperation. She said the HELPIO is a mobile application that provides a safe space for victims of sexual abuse and with the collaboration of relevant organizations like NITDA and other security agencies, the Hub will achieve its mandate of ensuring victims get absolute justice.

She sought support from NITDA for the provision of tools and resources which will help in the Hub’s training programmes and promises to give details of solar panels needed to enable the Hub to get its maximum productivity.

The surprise visit made on Friday night by the leaders of the ruling All Progressives Congress (APC) to former President Goodluck Jonathan at his residence in Abuja triggered a stir in the major political camps, resulting in at least four possible theories…Minister directs NITDA  Minister directs NITDA