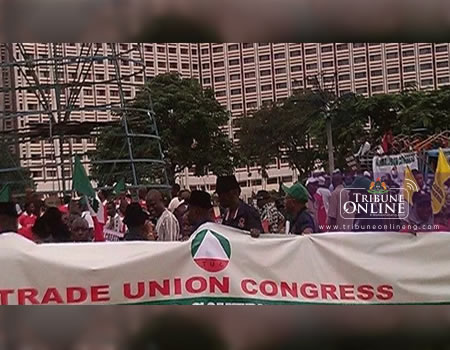 THE Trade Union Congress (TUC), said the organized labour would join other stakeholders, especially its civil society allies to work and ensure that security vote is outlawed by Nigeria constitution.

President of TUC and gubernatorial aspirant under the All Progressives Congress (APC), Comrade Bobboi Kaigama, said the organized labour is already looking forward to the amendment of the constitution where security votes will be outlawed.

Kaigama, who spoke with TribuneOnline on his political aspiration said the governors have been hidden under security vote to embezzle billions of Naira and using it as a pipeline to syphon money meant for the people and development of their states and people.

According to him, some governors deliberately create crisis in their states to justify their need for security vote.

“We are aware that some governors are only creating crisis so that they can use the money to address the security in the name of security votes. We are looking forward to the amendment of the constitution where security votes will be outlawed,” Kaigama said.

The TUC president said any state governor cannot justify their inability and failure to pay salary, adding that many of them are very lazy, only waiting for allocation from the federation account.

He said: “People are mismanaging the little resources that we have. For governors to say that they don’t have resources to pay is something that we disagree with. We believe that if you have offered yourself to serve the people, you must be able to enhance your internally generated revenue. If you don’t know how to do that, give way to those who are prepared to enhance their IGR
“You cannot lie down in your office or in your house to wait for allocation from the federation account, while not generating your own resources. If you don’t develop the potentials that God has given you in the area of agriculture, solid minerals, tourism to have enough money.”