Injury Time with Pius Adesanmi
By PIUS ADESANMI On Jan 13, 2019 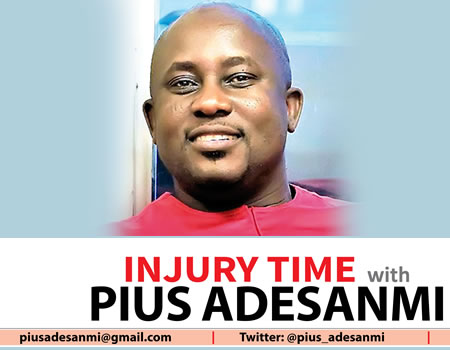 Nigeria’s Senate President, His Excellency Distinguished Senator Bukola Saraki, dominated our public sphere last week. No, he was not in every living room in the country because he was campaigning for Atiku Abubakar as head of the former Vice President’s campaign gig. No, he was not disturbing the country’s sleep because he is currently fighting the political battle of his life to keep his Senate seat, his constituents in Kwara state having launched an otogetistic campaign to end decades of plantation slavery to the Saraki family.

Rather, in a move which appeared to have been choreographed with Atiku Abubakar as I observed on my Twitter timeline, Saraki declared war on corruption and screamed for a week at such high decibel levels as to pose a clear and present danger to Nigeria’s ear drums. From NNPC to the federal budget, Saraki beamed his searchlight on every sector, every nook and cranny of the body politic, found fetid corruption, and denounced it. Nigeria was heading for the doldrums because of corruption, he announced with unmistakable finger pointing at President Buhari, and he, Saraki, was the demiurge who, like Jesus Christ some two thousand years ago, would pick up koboko and flog the moneychangers and corruption out of Nigeria’s system.

It was like a magic-realist scene out of an Amos Tutuola novel. I had to pinch myself several times to make sure I wasn’t dreaming; to ascertain that BukolaSaraki had indeed hoisted himself on an anti-corruption pedestal. Nigeria lost one valuable week listening to such an unworthy anti-corruption messenger. Two factors made Saraki’s farcical week possible and those who enabled him and allowed this to happenshould bow their heads in shame.

The first culprit – you guessed right! – is President Buhari. Only members of the national cult of  Buhari still delude themselves that the President is leading Nigeria in an anti-corruption war. Any objective observer not wearing Buhari blinders will realize that the President’s anti-corruption war collapsed less than one year into the life of this administration because of Mr. Buhari’s unquenchable hypocrisy. His first budget was a fiasco because it was padded beyond recognition. He made perfunctory noises about punishing the culprits only to shuffle them within the system with not even a rap on the wrist. Then he started looking away from anybody around him accused of corruption – acting only very rarely and with considerable reluctance, needing to be dragged kicking and screaming to do the right thing – BabachirLawal, Kemi Adeosun.

In this election cycle, President Buhari has turned hypocrisy and tolerance of corruption to statecraft. He went to Paris to heap praises on a state Governor caught on video accepting dollar bribe; his campaign organization is littered with indictees of his own EFCC. When President Buhari launched his campaign in Uyo, it was a national tragedy to see the anti-corruption President on the podium with GodswillAkpabio, an EFCC indictee. Just this past week, President Buhari appeared in an Aso Villa photo-op with Babayo Gamawa, a fellow indicted by his own EFCC for accepting a N3.5 billion bribe from Diezani Allison Madueke!

We also woke up last week to a grandiloquent announcement by President Buhari that he will not “spend government money on his campaign”. That, naturally, is the funniest statement I’ve heard in the current political cycle. Elected officials of every hue and stripe have been openly donating funds and resources to President Buhari’s campaign, screaming the risible canard that such donations were sourced from “friends and well-wishers”. President Buhari is never one to question the source of donations to his campaign. Members of the Buhari cult nationwide are trigger ready to shout people down and insist that the fault is with the donor and not the receiver. Besides, the President could not have been aware of such donations for there are many mansions in Mr. Buhari’s father’s house.

This is the broad context of presidential demission in which Bukola Saraki, ever the opportunist, sensed an opening to position himself as Nigeria’s new anti-corruption messiah. Leadership abhors a vacuum. With President Buhari’s symbolic demission from the anti-corruption war, something or somebody was bound to step in. Saraki stepped in. He was massively aided in his opportunism by the media. I have said it before and it bears repeating: if a revolution were ever to happen in Nigeria, many in the media would be tied to the stakes and shot for their history of horrendous decisions on the sort of characters they always elect to inflict on the public sphere as credible pundits.

Name any high-profile EFCC indictee or convict who does not become a darling of Nigeria’s mainstream media, sought after to weigh in on national issues. Hardly had Bode George returned from prison than our media descended on him, seeking his opinion weekly “on burning national issues”.  On his return from prison in London, our media swooped on James Ibori, offering him platforms to “bare his mind on crucial national issues”. Somewhere in the brains of Nigerian newspaper editors, it was ok to send reporters to James Ibori not to grill him about life in prison and life after prison as a convicted criminal but as a credible participant in national discourse.

The misfortune of Evans the kidnapper is that he never occupied any political office before he took to crime. Had he occupied a minor political office before taking to crime, he would have become an opinion shaper, sought after by journalists to weigh in on issues ranging from the economy to Jose Mourinho next club. This explains how a newspaper or a television station could wake up and decide that the Nigerian people needed to hear whatever it is that Bukola Saraki had to say about corruption. Just like that!

Anybody in need of a refresher course on the allegation of corruption against Bukola Saraki needs to go to the archives of Premium Times. Ever since he joined the corruption big leagues with Societe Generale Bank in the 1990s, he has never looked back. And we now know that he attracts corruption like a magnet for two of his aides have had brushes with the EFCC for fraud and racketeering. Not only has Saraki, the anti-corruption crusader, played deaf and dumb with the allegations involving his aides but one of the aides in question, who allegedly set up an extensive salary racketeering venture for his US-based wife, is daily on Twitter, strutting around the public sphere arrogantly like a peacock.

Nigeria is a struggle for meaning. The ideological, conceptual, and thematic components of our body politic are daily under assault by unworthy but rich and powerful embezzlers of meaning. A few weeks ago, it was Festus Keyamo who sought to embezzle the meaning of patriotism in broad daylight and redefine it as sheepish, unquestioning adherence to the cult of Buhari. Now, Saraki is attempting to smuggle himself into a nice corner of public memory by embezzling the meaning of corruption.

No, Mr. Saraki, you do not get to define or speak against corruption. In Britain, your second country of citizenship, you wouldn’t be in public office, let alone accede to the position of one of that country’s highest elected officials. Given your record, you’d be in jail. May your constituents in Ilorin bring otogeism to fruition so you may walk into the footnotes of Nigeria’s history and stop your assault on our sensibilities.