The power of Amotekun 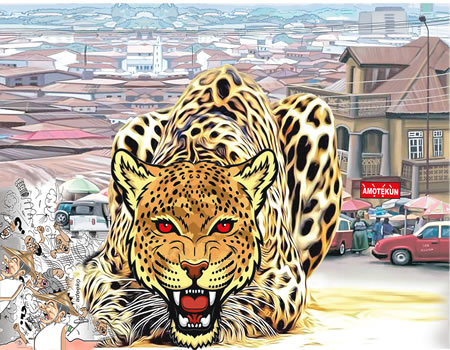 Security is not just the most sacred value, it is the ultimate value. That is why it is philosophised that survival is the first law in nature. It is true that coronavirus issues now tend to override many other issues, but we must not lose our guard. This is because the history of warfare shows that adversaries always prefer to attack their targets during crisis.

The governors, obas and people of the South-West Zone are hereby highly appreciated and congratulated for courageously, faithfully, doggedly and patriotically rising to the challenge posed by acidic insecurity pathogens in the zone, by the establishment of Amotekun. It is only a bastard that will agree to hold the lamp while an invader rapes his mother. The six governors of Oyo, Lagos, Ekiti, Ondo, Osun and Ogun states, by that singular act of setting aside political and other cleavages and ignoring all distractions and attractions to work for the security of those they swore to govern and protect, proved themselves to not only be aware and alive to their primary responsibility but also true sons of Oduduwa. No government anywhere in this world is worth its salt, or worth defending, if it fails to guarantee the security of lives and property of the people.

Amotekun, the name adopted by the South-West for its security outfit, took me back along memory lane to 1977 when I first arrived Ibadan and boarded a taxi to Ogbomoso Town, both in Oyo State, for my National Youth Service. The label on the taxi I entered to take me to Olivet Heights, Oyo was “Omoekun”. I had asked the taxi driver “wetin be Omoekun wey you write for your cab?” and he replied “omoekun means the child of Leopard. You know say Leopard no dey fear. I fit run well well, I fit climb any tree and I dey very active and vigilant always.”

When I remembered the words of this Yoruba driver, I said the governors could not have settled for a better label because the situation we find ourselves today in the country generally and in the South-West specifically requires courage, race for life, vigilance and ability to climb any tree for refuge. Amotekun is for the safety of any and every law-abiding person in the entire South-West and, as I said in the interview with a Nigerian Tribune correspondent in February this year, any person who opposes or sabotages Amotekun is an enemy of the people, Nigeria and humanity.  What remained then was for the six states to give Amotekun the legal backing it required. Now that this has been done, it remains to make it not only to work, but to work well to fulfill its purpose to people’s expectations and this requires among others Amotekun itself knowing its power and using it very well for the people.

The power of the leopard is not in its claws, jaws or teeth, but in its spirit, intelligence, agility, speed, as well as mastery and dominance of its environment. Thus, Amotekun first needs to carry out threat analysis facing the South-West geopolitical zone and neighbouring zones, both from external aggressors and internal criminals, effect threat-mapping to know where the threats are located (visible and invisible threats) and then map out strategies to neutralise the threat from manifesting and preventing them from endangering the lives, properties and social values of the people. In this, Amotekun is to fashion out how to encircle the threats, and how to work together with neighbours and federal security agents to neutralise threat elements that escape from their location, pending the arrival of multilevel policing (State police). I have read of demands for the Amotekun Corps to carry arms; and I have heard the Inspector General of Police say on television that they (Police) won’t support that.

The real power of Amotekun is not and should not be in AK 47 rifles that some threat elements wield. It is in: (1) Strong popular support of south-westerners at home and abroad and of millions of non-south westerners at home and abroad, even as far as Nnamdi Kanu in Israel who has pledged a million personnel, if needed; (2) Intelligence: Especially Strategic Spiritual Intelligence (SSI) and Counter-Strategic Spiritual Intelligence (C-SSI) which can reveal the locations of threat elements and their plans, intentions and even capacities up to the next 10 or more years. SSI will also reveal herbs for treating wounded corps members. If Nigerians were using SSI, we won’t be so frightened by coronavirus! In fact, Nigeria would have been earning billions of dollars today selling herbs and roots to the world for preventing/ curing coronavirus;

(3) Communication: the people must be able to reach Amotekun from their homes, streets, markets, farms, forests, rivers and roads when at risk at the press of a button; (4) Speed of response to distress call: This should strive to be a maximum of 10 to15 minutes. SSI will make the Amotekun Corps very proactive, rather than being a reactive body. Amotekun, with its component members of hunters and Agbekoya, some of whom can commune with the spirits, should strive to be useful too in health security. It is all about security. The members of Amotekun who have the calling, should be aided to develop their capacities and competencies to locate trees, shrubs and flowers that can effectively tame the diseases that terrorise humanity.

This will be source of extra huge revenue for the corps. They can also help humanity reveal these deadly diseases before they come to make humanity get prepared Africa is supposed to provide the world with herbal remedies in times as this when HIV/AIDS, Lassa Fever, Ebola and Coronavirus are devastating the world. Every person identity group and nation has his or its destiny which can be revealed only through SSI. The wicked and greedy find out and often try to spiritually block the manifestation of this destiny.Bad governance and insecurity are two physical elements that limit, shut down or totally prevent the fulfillment of people’s, group’s or nation’s destinies;

(4) Commitment to the cause of the peoples’ safety: This will endear Amotekun to the people. Bakassi Boys in the South-East started very well but was later hijacked by some politicians who used them against opponents. Some people also corrupted some of the Boys who were used to settle scores; while some of the Boys used the body for selfish ends. Amotekun must be devoid of these abuses, to avoid it losing its taste and the people spitting it out.

(5) Strategic Spiritual Powers: This is for neutraliing the spiritual powers of threat elements, being ahead of them, and fortifying core Amotekun leaders, commanders and action men and women. A lot can be learned from the Odua People’s Congress (OPC) and the security thoughts and actions of Oba Ewuare the Great of Bini Kingdom and General Butt-naked of Liberia. Strategic Spiritual Powers, when properly deployed, can ambush and silence AK 47 and bombs!;

(6) Research to be ahead of threat elements and criminals: This will require setting up a central database, fingerprint and passport (pictures) register of all arrested suspects; (7) Following upon all cases and suspects handed over to federal agents and adjusting modus operandi accordingly, if necessary;

(7)sEducation, enlightenment and mobilization of the masses accordingly: For empirical purposes, it is necessary that Amotekun seek federal authority to carry arms, pending when state police takes off. But I wish to repeat here that the real power of the ekun is not in its claws, teeth or jaws. It is in the innate qualities and capacities of its spirit, intelligence and agility. So it is with Amotekun. The achievements of Amotekun will not be measured by how many enemies of the people its operatives killed, but by how many of its people were prevented from being killed, raped, robbed or forcefully married; the ease and confidence with which people go about their legitimate duties in the day and sleep well in the night; how many trucks, bombs/explosive devices, and petrol tanks deliberately set to destroy the people and their properties and economy were stopped from achieving their aims, as well as who effectively controls the farms, forest, and night hours in the territory of Amotekun.

Amotekun, once put in operation, should quickly roll back the gains of threat elements by, for example, locating and neutralising where enemies of the people have dug-in (such as assembling points and weapons buried in the womb of time waiting to deliver catastrophe); and learning the language of threat elements in order to be able to intercept and decode threat messages. Also, any sons, daughters or groups of them that the enemies of the people have compromised already, out of fear or corruption, must be freed and brought back to the fold of collective values.

Finally, I do not envisage funds to be a problem for Amotekun. The state governments will definitely do their bit, but I am very confident that, if Amotekun delivers to the satisfaction of the people, including business companies, they will over satisfy Amotekun with funds, buildings, vehicles, gadgets and human intelligence necessary for the super performance of the corps.

EDITORIAL: NNPC Boss On Refineries
LAST week, the Group Managing Director of the Nigerian National Petroleum Corporation (NNPC), Mallam Mele Kyari, declared that the corporation would soon relieve itself of the responsibility of managing the country’s refineries after the ongoing rehabilitation. According to the NNPC boss, the four refineries… Read full story

The Role Of Traditional Rulers – Sanusi The Genius: A Case Study (4)
IN the last few weeks, I have discussed how the British colonial Masters gradually increased their control and influence over what was later called Southern Protectorate and Northern protectorate by assaulting and destroying our traditional heritage. One of the strategies was the dethronement and banishing of… Read full story

Coronavirus Fallout Affects Family Planning, Women’s Health Rights
The global epidemic of COVID-19 is wreaking havoc on a wide array of health, economic, social and personal decisions. With many cities on lockdown and businesses and schools shutting their doors, the COVID-19 virus is dramatically changing everyday life for people across the country, including those seeking… Read full story

Of Improved Medical Care, Palliatives
OBVIOUSLY, Covid-19 pandemic will change the way the world does things. One can only hope Nigeria is not left behind in the mantra of catering for citizens beyond what successive governments had rendered in terms of prompt response to emergency situations and distribution of relief materials when it matters most… Read full story

Coronavirus: What Heart Patients Need To Know?
People with heart disease and other underlying health conditions are at high risk of becoming seriously ill if they develop COVID-19. Now, experts warn that COVID-19 could even worsen an underlying heart conditions… Read full story

COVID-19: Use Only Herbs Approved By NAFDAC, Virologists Warn
A virologist, Professor Sunday Omilabu, has said that although lots of local herbs are promising for treating COVID-19, Nigerians should still be cautious to take only local herbs and herbal products licensed by National Agency for Food, Drug Administration and Control… Read full story

Are Finger Condoms Beneficial?
Finger condoms or cots are medical devices used to cover one or more fingers in situations where a full glove seems unnecessary. Like medical and rubber gloves, finger cots may be made from a variety of water-tight materials, including latex, nitrile rubber, and vinyl… Read full story

Are The Detained Caverton Pilots Victims Of Power Tussle?
LIKE joke, like joke, the two pilots of Caverton Helicopters have continued to be detained no thanks to the controversial order issued to effect their arrest and detention by the Rivers State Governor, Nyesom Wike… Read full story

The killing of Grace Ajibola

How COVID-19 is redefining Ekiti politics