Sylvester Oromoni: Coroner to commence inquest into cause of death Jan 15 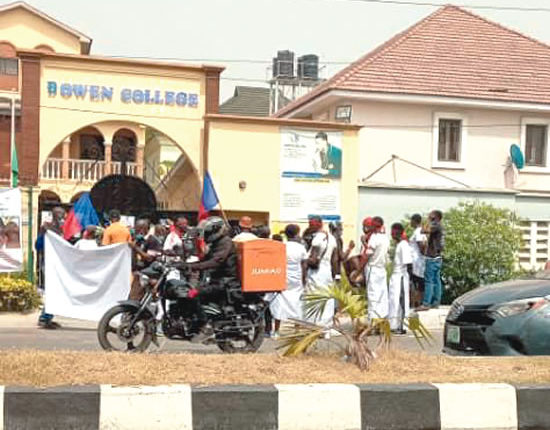 The Coroner of the Epe District of Lagos, Magistrate Mikail Olukayode Kadiri, has fixed Saturday, January 15, for the commencement of inquest into the cause of death of Sylvester Oromoni, a 12-year-old student of Dowen College, Lekki.

In a letter dated January 4, 2022, and addressed to the law firm of Falana and Falana, the legal practitioners to the Oromoni family, the coroner said that the inquest will be conducted by 9:00 a.m prompt and the hearing shall be in open court.

Magistrate Kadiri also reminded the lawyers to file and serve depositions of all witnesses they intend to call at the inquest. They are also to forward to the coroner a list of persons whom in their opinion need to be summoned by the court.

The depositions may be filed at any of the magisterial districts in Lagos and served electronically on all parties concerned.

On December 6, 2020, the law firm of Falana and Falana had written to the Chief Coroner of Lagos, Justice Mojisola Dada, to demand the inquest.

In response to the demand, Justice Dada had assigned the inquest to Magistrate Kadiri who had written to the law firm on December 7, 2021, and also gone ahead to fix a preliminary meeting for December 15, 2021.

Meanwhile, the Investigative Committee set up by the National Association of Nigerian Students (NANS) has asked the parents of late Sylvester Oromoni Jnr and Dowen College to make the medical records of the 12-year-old public.

It said the records will help to ascertain Oromoni’s health status before the incident at Dowen College happened.

The committee in a statement signed by its chairman, Oladimeji Uthman, also called on the Lagos State government to reject all entreaties to reopen the college, warning that reopening the college before the conclusion of investigations can only be done by an “enemy of humanity”.

The student body also threatened to embark on a state wide protest, should the government reopen the school anytime soon, pending the clarification of all doubts.

Uthman said the committee is in receipt of the autopsy report conducted by the police, which showed that Oromoni Jnr died of septicaemia, lobar pneumonia with acute pyelonephritis, pyomyositis of the right ankle and acute bacterial pneumonia due to severe sepsis.

He said the committee wonder why the police has kept the allegations of bullying out of its reports so far and why everyone kept mute on the allegations.

He added that the committee has “contacted a medical expert to make clarifications on how possible knee injury (as claimed by the Dowen College management initially) could develop to those infections mentioned by the police to be the cause of Late Sylvester Oromoni Jnr death.”

The statement further read in part: “We are dumbfounded, hearing that Sylvester Oromoni Jnr died of those infections. This is the reason we are requesting from the management of Dowen College and Sylvester’s family to release and make public his medical records/history in order to shed more light on this case and also to know if there is any ailments he was treating before his death.

“On our part, we will continue to interface with the family, submit the autopsy report for scrutiny (to our medical experts) and make our position known.

In a similar development, a group of youths under the aegis of Ijaw Youth Council, on Thursday, vowed to disrupt academic activities and prevent staff and students of Dowen College from accessing the premises if the school is reopened on Monday.

The disruption and disorderliness, according to them, was in solidarity to the Oromoni’s family and to drive home their displeasure towards the legal advice issued by the State’s Directorate of Public Prosecution (DPP) clearing staff and students of the college of complicity in the death of Sylvester Oromoni.

The members of the council staged a protest in front of the school carrying placards with various inscriptions, saying the school could not resume like others when justice was yet to be served.

According to one of their leaders who did not mention his name, the Ijaw youths are ready to come to Dowen College and join them if the school should reopen on Monday.

The leader said, “Now, we want to send a message to the governor of this state; I believe he is a well-trained person, if he supports injustice, then this school will not have peace.”

The leader added that they have the capacity even if the police bring their armoured tanks to the college.

He stated that nobody can stop them when they start their real protest.

The group restated that the school would not open until justice is served on the matter.

In a similar development, the Lagos State government has said Dowen College would remain shut for now until all issues surrounding the administrative lapses and regulatory issues in the school are fixed by the management.

It also said it had concluded plans to review for purpose of revalidating the guidelines for all boarding schools operating or intend to operate in the state.

The state’s Commissioner for Education, Mrs. Folasade Adefisayo, gave these hints on Thursday evening in a release made available to newsmen by the Head of Public Affairs unit of the ministry, Mr Ganiu Lawal.

She gave the hint as a reaction to the advice of the Directorate of Public Prosecution to the Police that Sylvester Oromoni’s death could not be convincingly linked to the alleged bullying by his seniors and consequently exonerated from the crime.

According to the commissioner, the ministry discovered some administrative lapses during inspection to the school and the comprehensive investigations carried out following the death of a student of Sylvester Oromoni.

While clarifying the fate of students of Dowen College in view of the resumption of schools for the second term 2021/2022 academic section in Lagos State, the commissioner said the ministry, aside the review of the operational guidelines of boarding schools and the requirement for establishing a boarding school in the state, noted that the ministry would begin the revalidation of all existing boarding school facilities across the state after the mid-term holidays.

She said the relevant departments and agencies of the ministry are being overhauled for improved performance in school monitoring and inspection across the state.