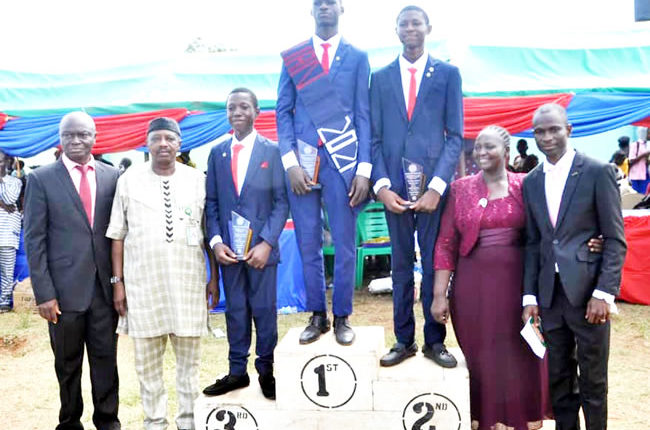 Sharon Rose Schools and College, Saki, last Saturday, graduated 100 senior students of the school, who had had to spend nine extra weeks in school as a result of the shift in WAEC and NECO examinations brought about by the COVID-19 pandemic.

At the 18th valedictory service, the Dean, School of Financial Management Studies, the Oke Ogun Polytechnic, Saki, Oyo State, Mr A. S. Oladeji, spoke on the topic ‘Preserve Your Heritage as a Potential Leader,’ where he charged the graduating students to preserve the knowledge they had acquired from the school.

“Education is beneficial in many aspects of life, especially personal and social, as it is the only heritage that cannot be taken away from a person. In addition, integrity, objectivity, resilience, self-confidence, motivation, self-discipline, intelligence and the like should be part of you as potential leaders,” the don said.

One of the chairmen of the occasion, Pastor A. E. Adedigba, advised the graduands to have the fear of God and endurance “because behind every glory, there is a story.”

Pastor Adedigba said “if you can endure, the Lord will lift you as well as your people,” and urged the students to avoid anything that could mar their progress as they journey on in life.

In his speech, the principal of the school, Mr Elijah Aderoju, appreciated God for the privilege of piloting the affairs of the school.

Aderoju commended the parents for having the courage to entrust their children to the school and prayed God to give them the grace to reap the fruits of their labour.

He promised that their confidence in the school would not be betrayed.

According to him, the proprietor, Deacon Sam Oluwasola; the Director of Schools, Mrs Teniola Oluwasola; members of staff and the alumni body are all worthy of commendation for the roles they played towards the success of the event.

The principal charged the graduands not to forget the godly values and morals imparted to them in the course of their academic career, saying these would be useful for them at higher levels of their academic pursuits.

The principal applauded all students who represented the school at various external competitions.

The senior prefect (male) of the graduating set, Ojediran Peace Taiwo, expressed gratitude to God for seeing them through the various challenges, especially during their final year.

“Our tenure only lasted one term and a few months due to the COVID-19 pandemic. However, we had four things in mind that kept us going: unity, tolerance, submission and service. We were invited to various competitions where we recorded impressive victories,” Ojediran said.

In view of all what he called its stellar achievements, Ojediran described his set as exquisite.

The overall best graduating student, Precious Akinlolu, expalined how he was able to achieve the feat.

“The world we are in is a highly competitive one and will only celebrate those who make it. You can be one,” he said.

Some of the highlioghts of the occasion were the formal presentation of the school’s principal, Mr Aderoju by the Director of Schools, Mrs Oluwasola and presentation of awards to the overall best three students, namely, Akinlolu Precious Olugbenga (first position), Ojediran Peace Taiwo (second position) and Ladokun Pius Makinde (third position).

The event was also attended by the vice chancellor of Atiba University, Oyo, Professor Olawale Okeniyi, and his team.

The subject I want to improve on this session

You can’t please everyone

Back to school: Words of advice from us to you, dear students