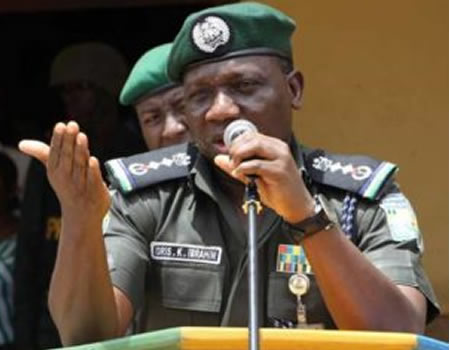 The Senate has set up an eight-man ad hoc committee to investigate allegations of corruption brought against the Inspector General of Police(IGP), Mr Ibrahim Idris, by Sen. Isah Misau (APC-Bauchi).

The senate also mandated its Committee on Ethics, Privileges and Public Petitions to investigate Police allegations against Sen. Misau, and present its findings to the House.

The Nigeria Police Force (NPF) had alleged that Misau did not follow due process when he retired from the force.

The News Agency of Nigeria (NAN) reports that the Senate’s resolution followed a Point of Order by Sen. Misau, who is the Chairman, Senate Committee on Navy.

Misau had told his colleagues that he had been having a running battle with the IGP over the level of corruption in the NPF.

The senator said he deemed it necessary to bring the matter before the Senate because it had been in public domain for “some weeks now”.

He accused the IGP of blackmailing him because he dared to talk about the level of corruption in the force.

“I am a retired Police officer and served for 10 years; my father served the force for 34 years. In fact, he joined the Police before I was born.

“I am concerned about what is happening in the Police in terms of bribery; there is a need for something urgent to be done to salvage the image of the institution.

“Before raising alarm on the irregularities in the institution, I called three serving officers and they confirmed to me that people pay more than N500,000 to get promoted.

“I also have other evidences that I am ready to release for investigation,’’ he said.

The lawmaker further alleged that the police was generating money from companies where officers were deployed to serve.

He lamented that while most Nigerians were without security protection, the force had deployed a large number of officers to guard companies and a few individuals.

“This is an open secret; it is obvious that even people with questionable character have Police protection and have been blaring sirens all over the place.

“A situation like that only depletes the number of Police personnel available to protect the ordinary citizens.

“We have excellent Police officers who are now demoralised because promotion is no longer based on merit and years of service.

“Another thing I found out is that there is illegal diversion of funds. Under the 2016 Budget, there was a line item for purchase of Armoured Personnel Carrier (APC), but instead of the APCs, luxury cars were purchased without virement,’’ Misau alleged.

On allegations that he left the NPF without due process, Misau said that he followed due process before retiring.

In his remarks, the President of the Senate, Dr. Bukola Saraki, said that in view of the weighty nature of the allegations brought against the Police, the Senate would not hesitate to investigate the matter.

“We have listened to him and he has raised a number of issues which we can’t sweep under the carpet.

“We have to reform our institutions and deal with allegations of corruption so as to cleanse them.

NAN reports that the Deputy Chief Whip, Sen. Francis Alimikhena, is the Chairman of the committee whose other members include Sen. Joshua Lidani (PDP-Gombe), Sen. Binta Masi (APC-Adamawa) and Sen. Duro Faseyi (PDP-Ekiti).