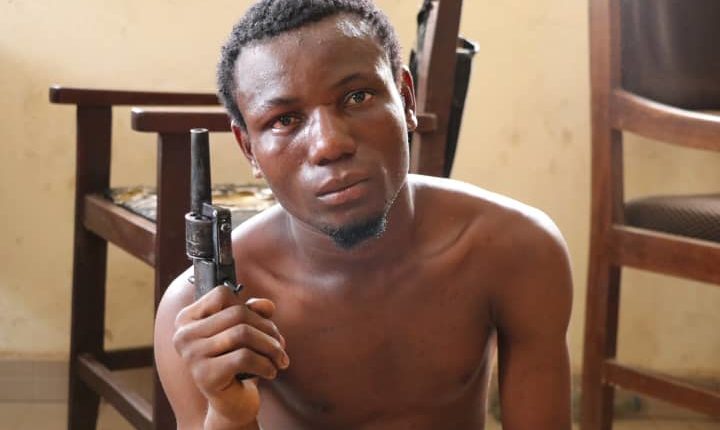 Security operatives of Kogi State Polytechnic have arrested one Shehu Tenimu Mohammed, an ND II student of the Department of Public Administration of the institution, for being in possession of a locally fabricated pistol while going inside the campus.

The Head, Public Relations and Protocol Unit of the institution, Mrs Uredo Omale, in a press statement issued, on Friday, said the student with Matriculation Number 2018/ND/PAD/170 was, in addition to the  possession of the pistol, also carrying five rounds of live ammunition while making his way through the main entrance of the Polytechnic, on Friday.

She stated that the arrest of the student was made possible by the  security network put in place to halt any attempt to breach the ban on end-of-examination celebration.

The statement also added that the management of the polytechnic beefed up security on campus, including daily routine check at the  entrance and the premises.

“The security operatives of the institution had on Thursday impounded a tricycle  which apparently was intended as a decoy for hiding and releasing gunshots outside the school gate.

In the same vein, the  security operatives also arrested a non-student suspected to be a hired mercenary with a charm made “African-bullet proof” on the campus on April 7th,2021. The suspect who has since been handed over to the law enforcement agency claimed that he came to the campus to celebrate the end of the examination with his sister.

It was the continuation of the security check at the gate that led to the arrest of Shehu Tenimu Mohammed who was coming to the campus purportedly to write his ND II final examination, on Friday.

Mohammed was stopped by the ‘stop and search’ officer and was asked to hand over his belongings.

He took to his heels when he realised he would be caught with live ammunition, but it was too late for him

He has since been handed over to the appropriate law enforcement agency for further interrogation and investigation.

Meanwhile, the Rector, Dr Salisu Ogbo Usman, has assured members of staff, students and the general public that no stone would be left unturned in the efforts to ensure that sanity is restored on the campus to make the atmosphere conducive for teaching and learning.

In spite of the huge investment in the water sector by the government and international organisations, water scarcity has grown to become a perennial nightmare for residents of Abeokuta, the Ogun State capital. This report x-rays the lives and experiences of residents in getting clean, potable and affordable water amidst the surge of COVID-19 cases in the state. Security operatives nab Kogi poly student with pistol, ammunition