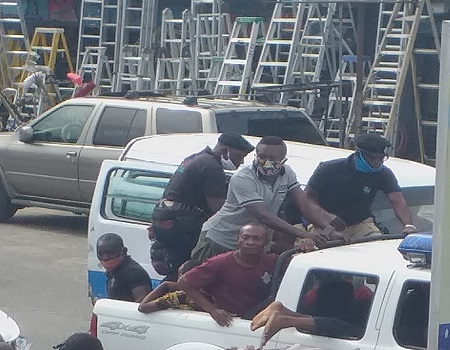 Security agents on Friday clamped down on face mask defaulters in the streets of Warri and environs.

Tribune Online was at Ginuwa junction, Warri-Sapele road, saw the security agents including members of the vigilante group, hurling passersby without face masks into a waiting white Hilux van.

Some measure of brute force was applied as a young man, who was resisting being hurled into the Hilux was forcefully bundled and dumped into the van.

The action drew the ire of road users and owners of shops in the area as they gathered in groups beholding the brutality on the face masks defaulters.

Those of them keeping their masks in their pockets were seen quickly bringing them out and wearing them for fear of being arrested.

Speaking with the Warri Area Commander, DSP Muhammed Garba, on the development on phone on Friday, he said the arrests were in line with the Federal Government’s directive, which, he maintained, had been gazetted.

“It’s a directive from the Federal Government, state and local government directive that anyone without face mask should be arrested,” he noted.