Halimat Lawal, 19, of the Department of Microbiology, emerged the overall best graduating student of Fountain University, Osogbo, Osun State, with a cumulative grade point average of 4.94 for the 2018/2019 session. In this interview with KOLA MUHAMMED she speaks on how she managed to achieve the feat. 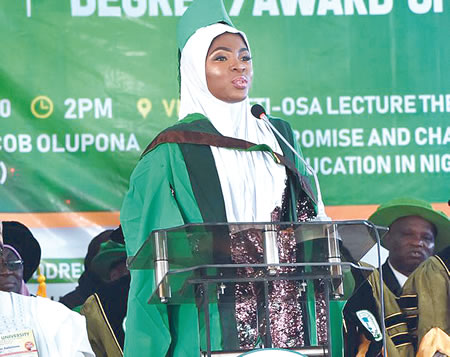 Being a Muslim, did religion influence your choice of Fountain University?

Do you think that early exposure to Arabic lessons give Muslim students an edge in academics?

I do believe it. Arabic is a very eloquent language and it is used to train the memory. If you can memorise the entire chapters and verses of the Qur’an, you will have a higher chance at improved memory retention.

What was your motivation? What kept you going?

My mother always told me that whatever I do, no matter what it is, I should do it for myself. So, what do I want for myself and where do I want to see myself? Being the best.

Have you always had it in mind to graduate with a first class?

Yes; it was always the goal. I set for myself being the best in whatever I do, wherever I find myself.

How often did you read to make such an outstanding grade?

I actually didn’t spend too much time reading. First, I read to get the course, then to have understanding. The secret has always been to pass on the knowledge I have gained which helped to improve my memory retention ability.

Did you have time for extracurricular activities?

I did make time. Although I’m not much of a sports person, I always tried to go out to support those who participated. Also, in my final year, I joined the Fountain University Leo Club, which was in the nascent stage then. I’m glad that we now have a Leo Club in Fountain University. For people who don’t know about Leo Club, it is a humanitarian club which purpose is to carry out service to humanity by finding ways to improve the society no matter how small. We help people who are unable to pay up their fees and engage in community service.

How did you cope with stress?

I’m a person who doesn’t like things to get to her. When I notice that something is getting to me, I step back, take a nap or read a story book; and when I’m calm, I get back to it. I feel most students pressurise themselves too much. Everybody wants to make it in school, but we shouldn’t let it be at the detriment of our mental, physical and emotional health. If you have a problem whatsoever, step back and sort yourself out, then come back stronger.

How did your parents feel about your achievement?

There’s no parent who will not feel joyous if such happens. My parents went through a lot for my siblings and I. So, the joy could be understood when their struggles were appreciated.

What are your plans after this first degree?

I am currently undergoing the mandatory one-year national youth service in Lagos State. After that, I would like to go for another degree, Medicine and Surgery, in order to fulfil my lifelong dream of becoming a medical doctor.

Why did you opt to study Microbiology instead of going straight for Medicine and Surgery?

After obtaining my Secondary School Leaving Certificate, I was unable to secure admission for Medicine because of my age, as I was barely 14 years old then. I decided to opt for a closely related course that could help me achieve my ambition of studying Medicine later and an institution that would not mind my age for admission.

Having interacted with graduates of federal institutions during the national service, what is your impression, comparing graduates of public and private universities?

Were you in any relationship while on campus and how did you manage?

Yes, I was in a situation which was complicated from 200 level to 400 level, but things eventually got balanced. But as complicated as the situation was, my boyfriend was the one who always pushed me to do more and be better. I would say anywhere that he was, and still is my support system.

Could you shed light on your experience growing up?

I am from Ikirun, Osun State, from a family of eight children. Growing up was really fun as there was always someone to talk to or even play with. I’m from a beautiful family where we all believe that having the same mother doesn’t mean that we would have the same pattern of thinking and behaviour. So, there’s no judgement and there’s freedom to choose your path.

Any piece of advice for students who wish to follow in your footsteps?

Always put God first in all you do.

Why toll gates should be reintroduced —Ex-tollgate manager

What are the true costs of smell loss?