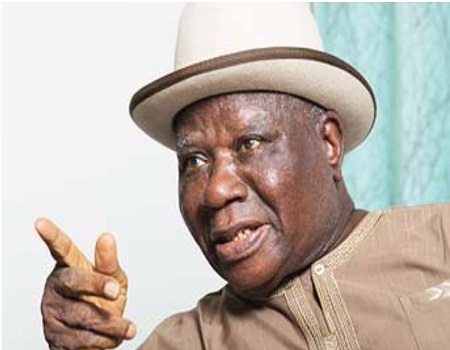 Elder statesmen, Chief Edwin Clark, has warned the Federal Government not to scrap the Presidential Amnesty Programme (PAP) as it may force Niger Delta youths back to the trenches.

Addressing a virtual press conference in Abuja, on Monday, he revealed that an Investigative Committee set up under the Office of the National Security Adviser (NSA) has recommended the discontinuation of the programme by December 2020.

He said if this happens, it will amount to insensitivity and a deliberate attempt to awaken trouble in the area.

The Ijaw leader stated: “Just about 11 days ago, I held a Press Briefing advising and cautioning the Vice President, His Excellency, Prof Yemi Osinbajo, SAN, to tread cautiously on Niger Delta Affairs, I have cause to, again, advice/warn the Federal Government, to desist from anything that will truncate the fragile peace that we have in the Niger Delta region.

“I say this because, just yesterday, rumours were rife, that the 4-man investigative panel headed by Amb. A. A. Lawal, set up by the Federal Government, through the Office of the National Security Adviser, Maj Gen Babagana Mohammed Monguno (rtd), to look into the activities of the Presidential Amnesty Programme (PAP), has recommended the scrapping of the Programme by December this year, 2020.

“If this is true, it will be an epic example of what we say in local parlance ‘trouble dey sleep, yanga go wake am’. This is not a threat; it is stating the obvious of what will actually happen.

“When I got this information yesterday, my temper was high because how can a region which contributes so much to the economic growth, and by extension, political and social growth of the country be treated with so much disdain and spite.”

Chief Clark recalled the sacrifices some of the leaders made before a compromise of setting up the PAP was arrived at.

He added: “As at the time when former President Olusegun Obasanjo, handed over to the late President Umaru Musa Yar’Adua, there were too many issues bothering on the neglect and deprivation of the coastal Niger Delta region. As leaders, we tried several ways to resolve these issues.

“We were able to reach a compromise with former President Obasanjo and that gave rise to the setting up of the Niger Delta Development Commission (NDDC) in 1999. But this did not solve the perennial problems of neglect in the region.

“So our children, understandably, decided to take their fate into their own hands. They took over oil platforms, insisting that oil production should be stopped if the aftermath of the activities in the region cannot be addressed. This matter escalated.”

According to the former Federal Commissioner of Information, “It took several efforts on our part as leaders and elders of the region to convince these children, and with apprehension too on our part, because we were not sure of our safety as the youths were prepared for the worst, therefore anything could happen.”

Clark explained that because of the several changes in the leadership of the Amnesty Programme due to corruption allegations, the PAP office was unable to function properly for a long time.

“Various students on the scholarship of the programme at home and abroad were stranded, because their remittances were stopped, so they started agitating,” he stated.

Speaking more on the NSA Committee recommendation, Chief Clark frowned at its composition, pointing out that it was made of Northerners who did not visit the Niger Delta to see things for themselves.

He maintained: “The Federal Government, like I said earlier, through the Office of the National Security Adviser, Maj. Gen. Babagana Monguno, rtd, set up a 4-man Investigative Panel headed by Amb. A. A. Lawal, from Bauchi State and other three northerners as members, on February 28th 2020, and the job of this Panel, which all through its sitting, I understand, sat in the Office of the NSA, which was to end on April 24th 2020, has lingered until today, they have, up till this moment, taken over the administration of the PAP, operating from the NSA’s Office.

“Now we are getting information, that this ‘Investigative Panel’ is recommending the scrapping of the PAP by December this year, 2020.

“The question is, did Amb. Lawal and his team ever travel to the Niger Delta region to find out if the objective of setting up the Programme such as infrastructural development of sand filling; building low-cost houses, building roads, etc, which are to be carried out by the PAP as its Second Phase activities contained in the Proclamation, been achieved?

“As someone outside of the region does he really understand or feel the sufferings of the people of the region? Also, what measures have been put in place by the Federal Government to fulfil its promises to the region such as setting up modular refineries, the relocation of the operational headquarters of the International Oil Companies (IOCs) and the Ogoni Clean-Up as contained in the 16-Point Agenda of the Pan Niger Delta Forum (PANDEF) which we presented to Mr President at the Presidential Villa on November 1st 2017.

“Our living condition in the region has worsened. The PAP should be allowed to continue for some more time.

“Once again, I wish to advise the Federal Government to tread cautiously, except they have prepared another ‘Operation Crocodile Smile’. Wake not a sleeping lion. This is not a threat; it is a clarion call for peace.”

APGA leadership crisis: We will triumph in court ― Okeke faction