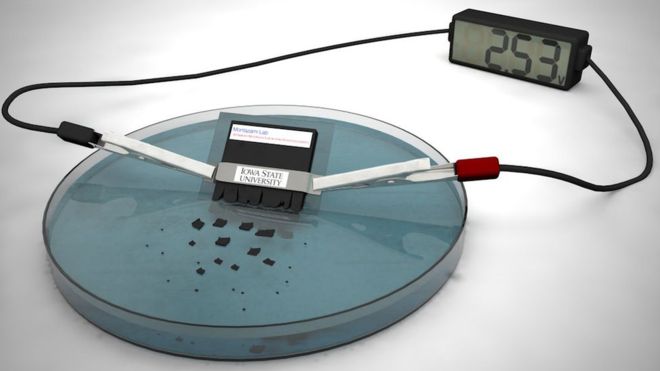 SCIENTISTS have developed a self-destructing battery capable of dissolving when exposed to heat or liquid.
It delivers 2.5 volts and can power a desktop calculator for 15 minutes.
It could be used to keep military secrets confidential, and in environmental monitoring devices.
Iowa State University mechanical engineering professor Reza Montazami said it was the first practical transient battery, BBC reported.
While this particular battery could not be used in the human body as it contain lithium, researchers have been examining how batteries could dissolve harmlessly within the human body, and prevent the pain of removal, for several years.
Prof Montazami developed the lithium-ion battery with a team of scientists whorecently published details of their discovery in the Journal of Polymer Science, Part B: Polymer Physics.
It measures 5mm in length, is 1mm thick and 6mm wide, and is similar to commercial batteries in terms of its components, structure and electrochemical reactions.
It contains an anode, cathode and an electrolyte separator within two layers of polyvinyl alcohol-based polymer.
When dropped in water, the battery’s polymer casing swells and the electrodes are broken apart, causing it to dissolve. However, it contains nanoparticles which do not degrade, meaning it does not dissolve entirely.
The entire process takes around half an hour.
“Unlike conventional electronics that are designed to last for extensive periods of time, a key and unique attribute of transient electronics is to operate over a typically short and well-defined period, and undergo fast and, ideally, complete self-deconstruction and vanish when transiency is triggered,” the scientific paper stated.
While it would be possible to create a more powerful battery, it would take longer to break down.