• Raid targeted at stopping smuggling in of foreign rice ― Customs 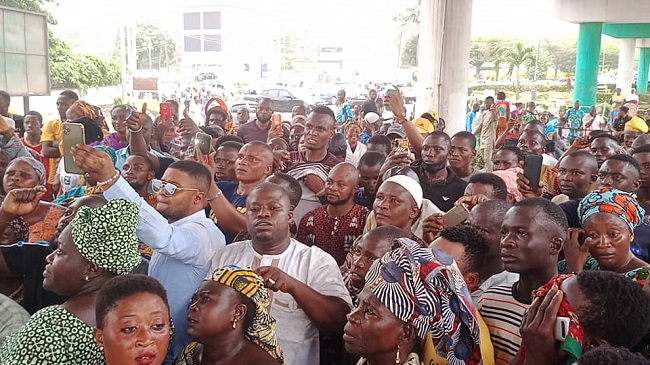 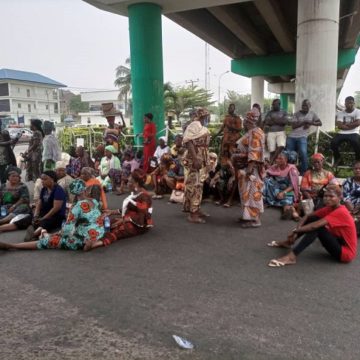 Rice traders of Bodija market, Ibadan, on Thursday, protested an overnight invasion of their stalls by men of the Nigeria Customs Service (NCS).

The traders of the Akala, Iwo Road car park and Mondesuya sections of the Bodija market had arrived on Thursday morning to see that men of the NCS had raided their shops and carted away thousands of bags of rice.

In the protest from Bodija market, down to the State Secretariat and through the Secretariat-University of Ibadan road, the protesting traders stated that no fewer than 88 shops were broken into with each shops containing bags of rice ranging from 400 to 900.

The protest had been preceded by a melee at Bodija market involving security agencies and some traders where one person was alleged to have been shot.

The raid carried by men of the Customs Service from the Federal Operations Unit (FOU) was said to have been in a bid to clampdown on those smuggling foreign rice into the country.

One of the victims, Mrs Mariam Isiaka, described the action of the Customs as tantamount to burglary.

Isiaka alleged that the Customs officers did not only cart away bags of rice but also large sums of money.

She noted that the traders sold imported rice because it was cheaper than Nigerian rice, adding that the rice sellers were now in debt because they got loans to purchase the bags of rice that were carted away.

She said, “At about 1 am, Customs invaded Bodija market and parked away from all the bags of rice in our shops. Some of us had 900 bags while others had 400 bags in their shops.

“They came in with trucks to pack bags of our rice. We have been robbed by Customs.

“They raided no fewer than 88 shops. They came with Hilux vehicles.

“We are not against selling Nigerian rice but it is more expensive than the one got from Cotonou.

“We do not get profit from selling Nigerian rice and this rice comes through Hausa states. We want the government to save us. We all got loans to get rice; with this raid, we are now in debt.

“One of our people was shot and is in the hospital.

“They also carted away money from our shops. They tied down the guards and shot one person.”

Another trader, Mrs R. O. Mosope, alleged that the men of the Customs not only carted away bags of rice but also bags of garri and cartons of Indomie.

Speaking, Public Relations Officer, Oyo/Osun Command of the NCS, Wey Kayode, said the men of the FOU acted within their statutory rights and in compliance with the mandate of the Federal Government to ensure that no foreign rice is allowed into the country.

He stated that he was unaware that officers shot anyone and that they carted away any other goods aside from bags of rice.

Kayode said: “The officers and men from the Federal Operations Unit (FOU) who have the statutory right to do what they did came to Bodija market and raided the market.

“They only took away rice and not other items. The FOU has statutory right. They operate anywhere within the country once they have the intelligence.

“It is a process by which they are trying to stop smuggling; if they have the information that some goods have been smuggled in, they can raid.

“I wasn’t there and can’t answer on whether bags of local rice were carted away alongside imported rice.

“Nobody shot anybody. The traders should understand that we are just trying to enforce a law that has been put down by the federal government. It is a critical policy that smuggling must not be done; rice must not be brought in. The traders should source for local rice and sell because the Federal Government has put a law that foreign rice should not be allowed in the country.”