Review of Rajeev Peshawaria’s Open Source Leadership: Reinventing Management When There Is No More Business As Usual 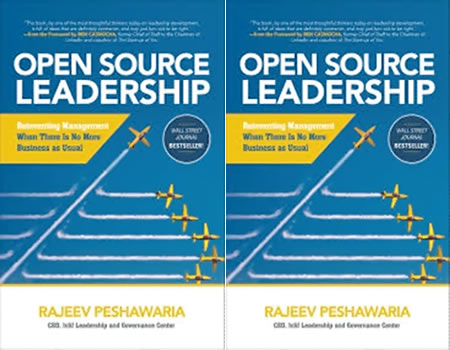 As the nature of how companies do business changes, what about time-honored managerial styles? Do they need to change as well?

Open Source Leadership is a newly published book by business author former Coca-Cola and Morgan Stanley executive and Rajeev Peshawaria.  Published by McGraw-Hill, Peshawaria’s book contends that many of the many management practices that persist today are no longer well-aligned with the reality of current workplaces, current employees … or even society in general.

One fundamental change that has happened just in the past generation is what Preshawaria labels “uber-connectivity.” Thanks to the Internet, mobile phones and other communication technologies, people are able to access information on nearly any topic and obtain answers to any question — wherever they are and whenever they want.

According to the author, this near-limitless access to information empowers people to an unprecedented degree – and it narrows the gulf between “experts” and “regular folks.”

As for “guru-worship” – the inclination of at least some people to seek out and learn from the soothsayers in the business world … that’s yesterday’s bread.

Lest Peshawaria be accused of being what he himself declares irrelevant, he remarks, “The guru is dead. Long live the Google.”

Couple uber-connectivity with increasing world population plus the concentration of that population in urban areas, and the result is companies that are now able to source talent and knowledge from wherever they exist.

How do these changes affect the theory and practice of business management?

In Peshawaria’s view, company leaders are still called upon to provide steadfast leadership about “purpose and values,” while at the same time acting with “compassion, humility and respect for people.”

Some of this may sound something like the “autocratic” management style that was prevalent in business until the 1980s – but not exactly. At the same time, it’s different from the “all-inclusive” democratic style that became ascendant in the world of business during the past three decades.  Let’s call it a hybrid.

One other important factor addressed by Peshawaria in his book is that employee motivation remains a nettlesome issue for companies – and far more complex than most management theories and stratagems account for.

One prescription from Peshawaria is for managers to dump the notion of giving “stretch goals” to all employees in an attempt to foster high performance. He argues that stretch goals work only for “the small percentage of employees [who] have the creativity, innovation and drive to truly relish and achieve stretch goals at any one point in time.”

According to Peshawaria, for the majority of employees stretch goals end up “causing stress, anxiety, or poorly thought-out behavior.”

The law of boundaries

Scaling Up Excellence by Robert Sutton and Huggy Rao