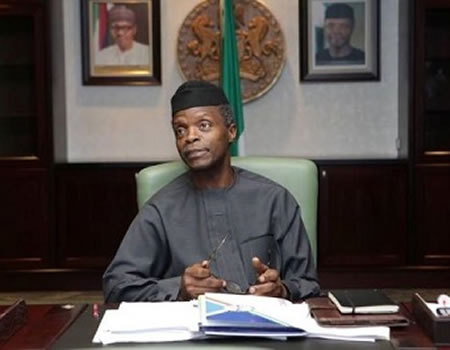 Vice President Yemi Osinbajo on Wednesday reiterated the commitment of the Federal Government to securing the release of the remaining abducted Chibok girls.

He made the assertion when he received a delegation of girl child rights advocates from various schools in Abuja on Wednesday in the Presidential Villa, Abuja, to mark the International Day of the Girl Child.

The delegation was led by officials from the Universal Basic Education Commission (UBEC), Save the Children International and the UNFPA.

He said it was important to send a clear message to the rest of the world that such criminal acts of abduction would not be condoned in the country.

Osinbajo said: “We want to be able to challenge men and women all over the world about this sort of behaviour, and this is one of the reasons why we are advocating that this kind of conduct must be met with the greatest possible objection and force.

“It is very important for us that those girls are returned; anyone who has a friend or child or anyone among the girls recognises that girls are more vulnerable than men, especially when they have been abducted by men stronger and older than themselves, and held in captivity for so long.

“We shouldn’t accept it. We should condemn it for the cowardly and wrongful act that it is, and do our best to give succour to the ladies who have suffered this particular injustice.”

He further said the Federal Government was working hard to ensure that all the remaining abducted Chibok girls are released and returned home safely to their parents.

He added: “We’ve had the unfortunate experience of having over 200 Chibok girls that were abducted. Again, as you know, some of them have been rescued; they have returned and are back home. But there are still some who are still out there, who we are still hoping and working every day to bring back home.”

The Vice President noted that the released Chibok girls are currently studying in the university adding: “We are happy to report that they are all doing very well, they are very excited about the new opportunities that they have and they are starting their lives afresh with a great deal of enthusiasm.”

Osinbajo congratulated the Girl Champion, Akam Ayo Blessing, who emerged as the Best Female Basic Education Certificate Examination Candidate, with 17As and one C.

He said: “Her success demonstrates that there is absolutely no difference in terms of capacity and resourcefulness between a boy child and a girl child. Girls are not less intelligent or resourceful than boys.

“Only those who, for some reason or the other, want to deceive themselves would argue at all that there is a difference of any kind, especially in intelligence or capacity, between men and women.”

We were used to win 2019 presidential election for Buhari, dumped thereafter ―…