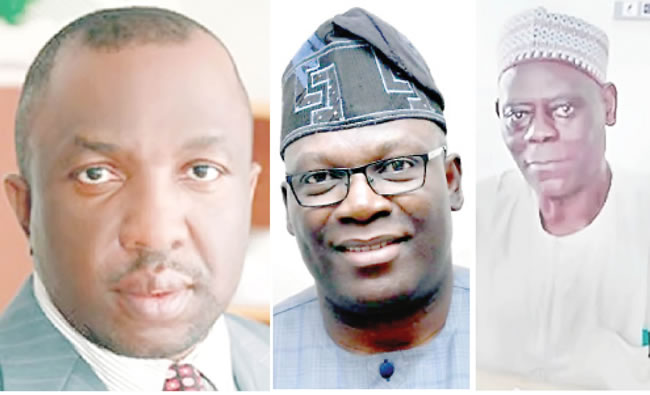 A GAMUT of issues and questions is trailing Monday’s declaration in Abuja of former Lagos State governor and All Progressives congress (APC) leader, Chief Bola Tinubu, of his much-touted presidential bid for 2023 presidency. His declaration, while speaking with newshounds after meeting with President Muhammadu Buhari, at the presidential villa to intimate him of his ambition, climaxed dizzying campaigns by hordes of groups urging him to run.

Though many acknowledged his right to contest under the constitution, some raised issues on the timing of the action. They assumed that he may have quickly launched the bid to outsmart other presidential hopefuls, including the Vice President, Professor Yemi Osinbajo (SAN) also widely speculated to have his eye on the presidency.

His declaration is also seen as a direct challenge to those elements in the APC that seem noncommittal to power shift to the south. The zoning formula that the party plans to adopt for the emerging political dispensation is shrouded in uncertainty. The interim leadership remains taciturn on the sharing formula to be applied for all elective offices at February convention and the next political dispensation creating room for unbridled speculations and permutations. With most of the contestants for the position of national chairman from the north, to be precise, the north-central, the assumption is that the post of president might go to the south.

A related issue thrown up by the Tinubu declaration is the factor of religion. Being a Muslim from the south, the contention is that the APC will be required to be sensitive to the sensibility of the adherents of other major faith, Christianity.  In the opinion of observers, the party and the APC leader is likely to come under pressure to strike the necessary balance in terms of religious inclination in the choice of a running mate. While the quest for a winning formula by the party and its candidate at the poll might be of importance, the issue of compromise will require strong political will and negotiations with other critical stakeholders in the Nigerian project.

Save for the military era, the leadership of the country has consistently guaranteed through and through a Muslim-Christian slant.  Vice President Atiku Abubakar, a Muslim from Adamawa State, was the deputy to former President Olusegun Obasanjo, Christian from Ogun State in the South-West, while Goodluck Jonathan from Bayelsa State in the South-South was the second-in-command to the late President Umaru Yar’Adua, from Katsina State, just as Sambo became vice president to Dr Jonathan when the latter became substantive president. A similar balance on the Muslim-Christian configuration is manifest in the Buhari presidency with Professor Osinbajo as vice president.

Eight APC stalwarts are in the contest for the post of national chairman. Most of them are of the Muslim faith. In the event of them being elected at the February convention of the party, the question of appropriate pairing in the presidential ticket of the APC will pose a serious problem. Various dynamics will have to come into play, because the circumstances that sustained the late Chief MKO Abiola and Ambassador Babagana Kingibe in the botched Third Republic that produced June 12 no longer exist in the current democratic setting.

As a power broker in the APC and indeed the nation’s political circle, Tinubu has a strong political base, coupled with a political network that has subsisted since 1999. But there are question on how close-knit the political fraternity is, following crevices on the wall. Through the superstructure, he had worked assiduously to liaise with other power brokers to actualize the Jonathan presidency and unseat the administration from power through the ballot box. He was the beautiful bride that collaborated with the North and other like-minds to enthrone the Buhari presidency in 2015. The question among now is: Can the kingmaker ultimately become king this time around?

Another curious question elicited by the Tinubu declaration concerns the relationship among the tendencies within the ruling APC. Vestiges of the legacy parties that coalesced to form the APC subsist.  The gulf threatened the semblance of cohesion in the party. At a stage, there were reports of moves by other powerful forces to frustrate Tinubu from proclaiming his bid. It was alleged that part of the plot was the poaching of PDP governors with the ticket for running mate (being Christian from the South) as a bait.

Lately, a myriad of pressure groups has sustained separate campaigns for Tinubu and Osinbajo. The groups inaugurated steering committees across the country. That Tinubu has unequivocally declared his bid underscores the question about the relationship between the godfather and his political son, which appears to have gone awry.  Will the two tendencies streamline their disparate positions?

More fundamental is the question on the role of President Buhari in the emerging political scenario in the APC. As the de facto leader of the party, he has a crucial role in determining the standard-bearer of the party for the 2023 election. Backed by close allies, he also has state apparatus to tilt the direction of things without necessarily circumventing due process in the APC.  They have erected a seemingly impregnable wall that will require extra effort push to penetrate and crack.  With the president stating that he would not disclose his favored candidate for fear of being extinguished prematurely by adversaries, does it suggest that Tituba is on a solo run? The statement of the president is suggestive that he has someone in mind and will not release his identity. The president holds the ace. According to his allies and associates, he is largely self-preserving as a leader. The narrative about him within his political family is that he tends to prioritise political issues that have direct correlation and impact on his interest.

Observers also asserted that part of the questions on the minds of many is the status of members of a powerful clique that forms the kitchen cabinet at the Presidency. They are seen as the alter ego of Mr President due to their awesome power and influence on state matters. They have had a series of running battles with other top officials in the corridors of power such the situation that played out during the long period of medical treatment of the President abroad. As the spin doctors of the administration, the cabal sometimes stirred the murky waters of politics through controversial utterances, vexatious policy issues and thrusts with attendant outrage.  What is the likely disposition of those forces, including the clique that predominates at the APC top echelon to the Tinubu bid?

The question about zoning or power shift has become enigmatic for the APC. Besides the religious attachment in power equilibrium is the challenge posed by zoning designed to ensure equity, fairness and justice between the North and the South, with due consideration for the ethnic heterogeneity of the country.  There was a spontaneous angry reaction from the South-East when Tinubu unveiled his bid.

With moves by South-East stakeholders to produce next president, there arises the teaser on if two of the five governors of the zone that defected from the PDP to the APC have the capacity to sway the Igbo ethnic stock to support an APC presidential hopeful from the South-West. And the APC loss of Edo State to the PDP last year raises issues about the strength and character of the party in the region, as well as the overall implications for the Tinubu bid.

Nonetheless, his action has opened a window for fresh political alliances, talks about the need for compromise and building of bridges of friendship along political lines. And this may led to many going back to the drawing board to strategize. The emerging scenario makes it compelling for the different power blocs and tendencies in the South-West, where such names as Otunba Gbenga Daniel, Dr Kayode Fayemi and Ibikunle Amosun are being linked to the presidential contest.

Cracks among northern political elite over the bid by Tinubu were reported before now: some APC governors from the North are not on the same page on the issue. Will he be ready for a deal with the northern establishment since power is never given a la carte? Power acquisition is about state management resources. You fight for it; you consult, negotiate, lobby and work to strike a compromise, build consensus, bridges and alliances.

To some pundits, the likely opposition from a few elements in South-West APC might pale into insignificance, given the long-drawn battle between Tinubu and South-West PDP in the last 22 years of civil rule in the country.  A perceived war of ideology characterized the emergence of the then General Obasanjo and a former Secretary to the Federal Government (SFG), Chief Olu Falae as candidates for the 1999 general election. The love lost between him and some powerful individuals in the PDP in the zone seem to remain. How does the former governor plan to manage it and herald a paradigm shift? Any thought about compromise?