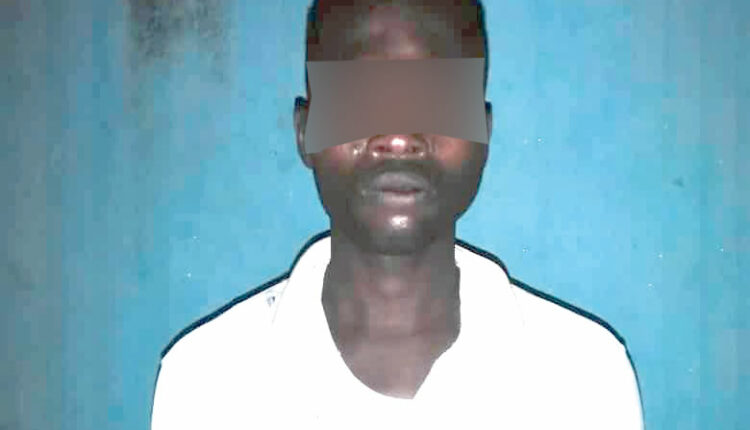 A white garment church prophet, Yusuf Ogundeji, has confirmed that he slept with a 16-year-old member, who eventually became pregnant. He however, said that he could not penetrate the sister of the pregnant girl and had to get off her, feeling remorseful.

Ogundeji  denied using diabolic means to put the girls to sleep, which he was accused of by the victims, saying that what he gave them was just meant for protection from spiritual attack.

The prophet was arrested by policemen from the Ogun State command for defiling two underage sisters who were attending same church with him.

The command’s Police Public Relations Officer, SP Abimbola Oyeyemi, told the Nigerian Tribune that it was the father of the girls who reported at Ajuwon divisional headquarters when he discovered that his teenage daughter was pregnant. Inquiries on who was responsible for the pregnancy  led to another shocking discovery that it was a prophet who impregnated her.

The PPRO said that the report made the Divisional Police Officer, SP Andrew Akinseye, to send detectives after the prophet for his arrest.

SP Oyeyemi added that in the course of investigation, it was discovered that the said prophet did not only have carnal knowledge of the now pregnant girl, he also defiled her 13-year-old younger sister.

“The two victims informed the police that whenever they had a vigil in the church, the prophet, who lives very close to the church, would ask them to go and stay in his house after the vigil which always came to an end at about 3am.

“They stated further that anytime they stayed in the prophet’s house, he would give them something to lick, and after licking it, they would sleep off, only to wake up and discover that the prophet had had sex with them,” the police spokesman disclosed.

The incident also made the state Commissioner of Police, Lanre Bankole, to order the transfer of the suspect to the anti-human trafficking and child labour unit of the State Criminal Investigation Department for further investigation.

Nigerian Tribune had an interview with the suspect, during which he said:

“I’m Yusuf Ogundeji. I’m from Ibadan, Oyo State, but I live in Akute, Ogun State. I’m 30 years old. I’m a painter and a prophet. I don’t have a permanent church structure. I used to go to churches to minister. I started the work of ministration about five years ago after being severally told by other prophets that I have a divine calling.

“I started having sex with the elder sister in 2021. It was the time I was sick. But this year, in August, we slept together again. It was her parents who called and told me she was pregnant.

“I don’t understand what is happening to me. I have a wife who has a child for me. We had a quarrel and got separated in September. But I had been having sexual relationship with the elder sister.”

The suspect also admitted he attempted doing the same to the younger sister once, but said he could not penetrate her, which made him to have a rethink and withdraw from the act.

“Concerning the younger sister, it happened only once. It was at night and she came to my house in preparation for a vigil. She had slept and I didn’t even know how it happened. As I climbed on her to have sex with her, I noticed that I couldn’t penetrate her easily. I realised that I was doing a wrong thing and quickly rolled off her. Her elder sister was also in my house but she was sleeping at that time,” he explained.

Speaking on what he was giving the girls to lick, the suspect said it was for traditional detoxification.

“I was not giving them any charm of something diabolic to lick. I was only giving them  what we call ‘ebu’ in Yoruba (to ward off evil powers), and I was using it myself. It was meant for protection against spiritual attack or any evil whenever we were going to or coming from church late in the night. It is usually used by many people. I started using the protection when I fell ill for months and couldn’t lift my hands and legs. That was the local medication given me at that time,” Ogundeji said.

He also stated that the elder sister was unaware of what transpired between him and the younger one.

Doctors were said to have seen bruises around the younger sister’s vulva during medical examination.

It was also learnt that the four months pregnant elder sister was a secondary school student in SSS2 class before the incident.

Please save me from my dad’s incestuous act, 14-year-old girl cries out in Ibadan

Early childhood education: Stakeholders worry over implications of decline in…

I regret having oral s3x with my son —Homosexual dad