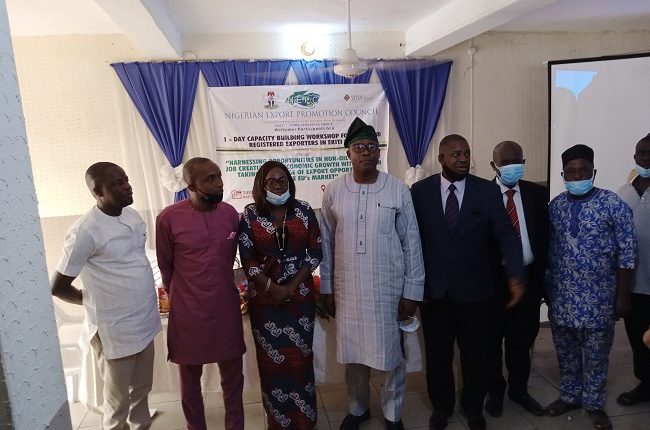 The Executive Director/Chief Executive Officer of the Nigeria Export Promotion Council (NEPC) Mr Olusegun Awolowo has revealed that if properly developed, the non-oil sector would earn the country over $50 billion and create 500,000 employment opportunities for teeming youths in the country.

Awolowo noted that the federal government was committed to drive the country from the dependence on crude oil and explore other areas which would boost economic growth and development.

He said, “In the non-oil sector the quest to create a market thrust of the federal government. The development of the non-oil sector if properly harnessed can see the country earn more than $50billion, create more than 500,000 additional jobs annually as a result of export activities. It can also lift millions of Nigerians out of poverty.”

Speaking on Tuesday at a one-day capacity building workshop organized by the Nigerian Export Promotion Council (NEPC) Ado-Ekiti Export Assistance Office, tagged ‘Harnessing Opportunities in Non-oil Export for Job Creation and Economic Growth with Focus on Taking Advantage of Export Opportunities to the EU’s market’ for SME’s and potential exporters, the CEO of NEPC explained that the agency has introduced programmes that would enable states to develop the product in which they have a comparative advantage for export.

He stressed that the reliance on crude oil has left the country vulnerable and highly susceptible to fluctuation in prices of crude, adding, “the volatility has led to price crash and subsequent recession that has brought about inflation.”

Represented by the Trade Promotion Advisor in Akure office, Mrs Iyabode Abe, Awolowo disclosed that Ekiti State has chosen Cassava and Banana under the One State One Product (OSOP) policy, which he said would generate employment opportunities and the creation of wealth.

According to him, the workshop would exposed participants to explore their comparative advantage to export products from the state and stimulate economic growth and prosperity.

Welcoming participants to the event, The Trade Promotion Advisor, (TPA) Ado-Ekiti, Mr Okhiulu Andrew noted that the purpose of the event was to create necessary awareness as well as the preparedness of SME’s in Ekiti State for the export market.

Declaring open the workshop, the permanent secretary of the state ministry of trade and industry, Mr Ayodele Adeyanju said the administration of Dr Kayode Fayemi is committed to creating an enabling environment for private individuals or agencies towards transforming the economy of Ekiti.

“Export plays a vital role in the growth of any economy, foreign trade is highly beneficial to a nation. Don’t forget that trade is one of the several catalysts of productivity and growth, hence its contributions contingent on its weight in the aggregate economic activities,” he said.

Adeyanju added that the establishment of the NEPC office in the state was a deliberate effort by the government to give opportunities to exporters in taking their products to the international market in a bid to improve revenue economic growth.

Resource persons at the program include; SMEDAN and NIRSAL who made opened various government financial widows that SMEs in the State could explore to expand their production capacity as well as produce for export market.