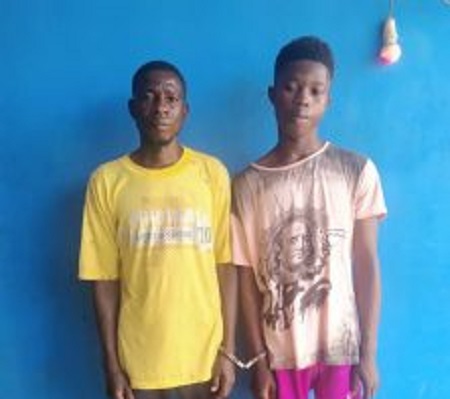 The Ogun State Police Command have arrested two suspected kidnappers, Mohammed Abubakar, 42, and Clinton Niche, 18, while trying to collect ransom money at the Agbara area of the state.

The police spokesman in the state, DSP Abimbola Oyeyemi, said this on Monday in a statement issued to newsmen in Ota. According to him, the suspects were arrested on October 3.

Oyeyemi explained that the two suspects were arrested following a report lodged at Agbara area command by one Stephen Ajibili, who reported that his seven-year-old son, Daniel Ajibili, had been kidnapped.

He added that his son was abducted by unknown persons while he was sent on an errand by his mother at about 11.20 a.m. on the fateful day.

Ajibili stated further that the abductors had called him and demanded for the sum of N1 million if he wants his son released.

“Consequently upon the report, the acting Area Commander, Agbara, CSP Kayode Shedrack, mobilised his detectives to embark on a technical and intelligence-based investigation to unravel those behind the dastardly act.

“The efforts of the detectives paid off when the suspects who had directed the victim’s parents to drop the ransom money somewhere were ambushed and apprehended by the police detectives.

“The suspects subsequently led the policemen to a bush where the young boy was tied to a tree by his abductors.

“On interrogation, the suspects informed the police that they are three in number, but the remaining member of their gang was the person watching over their victim while they came out to collect the ransom.

“Having discovered that his two accomplices have been arrested, he took to flight immediately,” he stated.

Meanwhile, the acting Commissioner of Police, DCP Abiodun Alamutu, has ordered the immediate transfer of the suspects to the anti-kidnapping section of the state criminal investigation and intelligence department for discreet investigation.

He also directed that the fleeing member of the gang be hunted for and brought to justice within the shortest possible period.

In spite of the huge investment in the water sector by the government and international organisations, water scarcity has grown to become a perennial nightmare for residents of Abeokuta, the Ogun State capital. This report x-rays the lives and experiences of residents in getting clean, potable and affordable water amidst the surge of COVID-19 cases in the state…  Police arrest suspected kidnappers while picking ransom money in Ogun